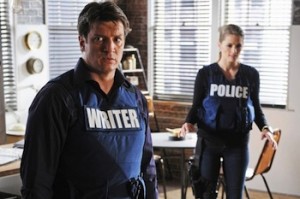 I can’t even begin to put into words how much I loved “Still.” Rob Hanning, I absolutely love you! I love the whole cast, the crew, and everyone involved in this show. The emotions that come out of me while watching this show is insane. This week was no exception. The smile that was on my face when Castle brought Beckett coffee in bed could not be wiped off so easily. I think that was the cutest opening scene of Castle ever! Castle was just adorable trying to convince Kate she totally fell for him the first time they met. I personally believe it was Castle who fell for Kate the first time they met. Then he fell even harder for her as she walked away from him in “Flowers for Your Grave.”

Was I the only one who cheered at the sight of the Police/Writer vests? It feels like we haven’t seen those bad boys in such a long time. I had so many feels and the episode was only 8 minutes old. I had a feeling “Still” was going to be a crazy intense episode and it didn’t take long for my feeling to be correct. The second Kate stepped on the sensor plate, I knew things were going to crazy real fast.

As a Caskett shipper this episode was just incredible. All the flashback scenes just made my shipper heart explode. From the first time Beckett cuffed Castle at the library, to Castle’s “Guess who’s got a date with a prostitute?” the flashback scenes were just amazing. To see how far they’ve both come was great. I kind of miss Kate pulling Castle’s ear and squeezing his nose. She should do it for old times sake.  Despite all the laughing and smiling from all these memories, Kate was still standing on a bomb and I was still freaking out. This episode had my heart in a firm grip and was squeezing very slowly. Despite all my freaking out, I still had the best time watching this episode. In fact, “Still” has dethroned “The Lives of Others” as my favourite episode this season and maybe ever.

I’m not sure about you guys, but some of my favourite flashbacks were the ones where everyone was trying to tell Beckett she had feelings for Castle. Beckett thought she was fooling herself, but she wasn’t fooling anyone else.

All these flashbacks make me want to go back and watch Castle from the beginning. Believe me, that’s probably what I’ll be doing to survive the summer hiatus.

Didn’t you just love how they were bickering about who like whom first? I loved how they even brought Espo into it. It kind of got your mind off the fact that Beckett was standing on a bomb. Then they cut to the bomb’s timer and you’re brought right back down to earth from the Caskett love fest. All these moments just solidify the connection Kate and Castle share. It was just so magical. Kate knew right away that Castle was lying to her when he said everything was alright regarding the bomb. Castle and Beckett have been in death defying situations before. That’s the power of Caskett. They make an incredible team. Whether they’re trying to escape crazy gun battles or a car sinking in the water, they always make it out together. The real magic happens when they start building theory together. He may not be a cop but he’s quite the storyteller.  I absolutely loved those flashbacks of them solving crimes. They’re just so in sync.

Now for the most amazing part of the episode. Not that the whole episode wasn’t amazing. It’s just the whole Castle fandom has been waiting for this for a very long time, and I have to say, it exceeded my expectations. Kate said I Love You!!!!!!! She even called him Rick! She finally said those 3 little words. I ugly cried during and after and I’m totally not ashamed of it. That whole scene was so beautifully done. The music playing in the background was perfect. Stana and Nathan were incredible. The tears flowing down her face made me cry even more. I could tell it was killing Castle having to leave her all alone. This is one scene I’m probably going to watch a million more times. I know some people will say it’s just a television show, but I could feel the emotions through the screen. The connection I have with this television show is incredible. I feel like I know these characters inside and out. Her standing there all alone was just heart breaking. It’s crazy what this show does to me. My feelings were everywhere. My heart was racing at such a high speed! When Beckett called her dad, that totally set me off again.

I hope I wasn’t the only one that got chills when we first heard Captain Montgomey’s voice. I still miss him. Those flashback scenes were just amazing. What an impact flashbacks can make when done correctly. Every other show should watch this episode of Castle when thinking about doing an episode like this. I’m not saying this because I think Castle can do no wrong, but tonight’s episode was so beautifully done. Much love to Orlando Machado Jr. (@machetecuts) who edited “Still” and found all the amazing moments and to Robert Duncan. The music was so beautifully done. The entire score and the Caskett theme gave me chills.

I didn’t think for one second Castle would stay away after Kate and the Captain made him leave. Up until the very end, they were going to solve the case. It’s what they do best. It was a very close call but they did it! Solved the case and got the password to disengage the bomb. I’m pretty sure the west coast heard my huge sigh of relief.  Not that I believed for one second that the bomb would actually go off.

I thought it was so cute when Kate asked Espo if Gates saw her and Castle almost kiss on the street. Of course another thing the fandom has been waiting on for a while now. Has Gates known about Castle and Beckett all along? It turns out SHE KNEW! Gate’s has known about Caskett! We all had our suspicions that she knew, but I’m so glad it’s now out in the open. It makes total sense now. Gates needed to maintain plausible deniability. I’d love to know, when exactly she figured it out?

As if my emotions weren’t already all over the place, when Beckett said (what I think was the best line of the night), “I think we’re just getting started” my feelings really exploded. That’s how I feel about this show. It’s in it’s 5th season and it’s just getting started. “Still” was just an incredibly beautiful love note to the fans. This show continuously rocks it week after week. I truly believe everyone involved with this show loves the fans as much as we love them. I will never forget this episode. I’m pretty sure when we’re old and sitting on our rocking chairs, my friends and I will still be talking about this episode.

There’s 2 episodes left this season and I’m totally freaking out. I don’t want this season to end but I can’t wait to see where Marlowe & Co. are going to take us next season. I’ve put all my trust in this team and I know they won’t let me down.

Some lines and moments from “Still” – flashback lines included:

“Who’s gonna be your bomb buddy?” – Castle to Beckett

Kate said she couldn’t stand Castle when they first met

“Guess who’s got a date with a prostitute?” – Castle

“Call me a muse again and I’ll break both your legs.” – Beckett

“You should hear me say fallacious.” – Beckett

“Dizzying array of hairstyles over the years.” – Castle

“Don’t ruin my story with your logic.” – Castle

“You know, if I have to be stuck not standing on a bomb, then I’m glad I’m stuck with you.” – Beckett

“Even on the worst day there’s a possibility for joy.”- Beckett

“I do this one thing, with ice cubes.” – Beckett

“There is one hot, wild, kinky thing that I do like doing. Putting killers behind bars.” – Beckett

“Please, let’s just stick it in and get this over with.” – Beckett

“I can’t help it if you get off by putting things in my mouth.” – Beckett

“You want me to bust out Jake and the Fatman again?” – Castle