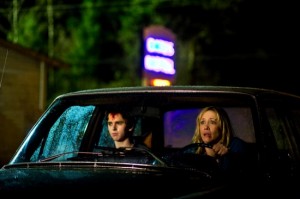 What Norma didn’t realize upon purchasing the motel that would become Bates Motel is that nobody stays in motels in White Pine Bay. Following the construction of the new road, the motel was even more out of the way than it would have been, so what few tourists would come to the sleepy Oregon town are off at inns closer to the center of town. Granted, having a guest at the motel would not have been feasible recently, considering everything that Norma and Norman were going through regarding Keith Summers, but as they seem to be safe (for now, at least), it’s time to start making money.

On the next episode of Bates Motel, the motel has seen its first guest check in. It comes at a good time and might provide a way for the Bates family to distract themselves from the tragedies that have defined their time in White Pine Bay. However, what if their guest is as secretive as the town residents they’ve come into contact with? White Pine Bay’s foundation is the hidden lives of its people, the secrets they create and the facades they use to mask who they really are, and it might be the type of sleepy coastal town to attract those looking to get away from their own misdeeds. Norma and Norman may think that their lives are going to get easier from here on out now that Zack is gone and their secrets are safe, but what if there is no easier? What if this is just how things are going to be as long as they’re in White Pine Bay?

Elsewhere on Bates Motel, Norman’s relationship with Bradley becomes more complicated than he expected. Are they nearing a breakup that could bring him to the place he was at with Zack and Sam?

What do you think the first guest at Bates Motel will be like? Are you surprised that last week’s episode (mostly) resolved the major plotline of the season? Is now the point where Norman begins becoming more like the Norman Bates of Psycho?