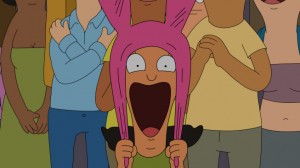 Gayle has promised to take Tina to see Boyz 4 Now, America’s hottest boy band, in concert. However, even though Tina has been practicing her concert scream, she won’t be getting to use it, due to an emergency involving Gayle’s cat that will keep their aunt from being able to drive her to the venue. While Tina’s distraught about not getting to see her favorite group, Louise doesn’t see the big deal about boy bands and is creeped out by the idea of 42-year-old women being superfans of teenage boys. Tina’s down mood doesn’t do anything for Louise, as she wasn’t the cause, so she decides to get her sister to the concert the best way she knows how: her bike.

On the way there, they run into Zeek and his cousin Leslie (who loves rhymes and pasta from a can), who are going to the concert to sell bootleg t-shirts and hot dogs. Louise offers to pay them gas money if they let her and Tina hitch a ride, which they do. On the way, Tina tries to educate Louise on the members of the group: black-haired Griffin is the hot one, Allen is the cute, shy one whose fanbase is known as the Allen-caholics, Matt is the moody older one with a mustache, and Boo Boo is the youngest, a crazy dancer with a good voice. Again, though, Louise is very apathetic.

At the concert venue, Tina gets faint and Louise has to help her to her seat; the youngest Belcher promises to leave as soon as she gets Tina all the way there. But before she can go back to Zeek and Leslie, the concert starts with the boys riding in on wire harnesses while “riding” various things: a surfboard, a scooter, roller blades, and a unicycle. During the entire entrance, Louise makes fun of the group, but it’s when Boo Boo does his intro that she notices something different. She has her very first crush.

Louise then runs into the bathroom to dump cold water in her face and try to get herself not to like Boo Boo. It doesn’t work, though, as she’s surrounded by merchandise with his face and fans talking about how cute his is, so she decides to indulge herself and pester Tina for information about him. Tina figures out that Louise has a crush and tries to tell her that it’s okay that she does, going over a list of things her sister likes about the young boy (who has yet to hit puberty), including his hair that she wants to hang under like an umbrella and his hideous, beautiful face that she wants to slap.

Once the concert is over, the two see girls lined up to go backstage and Louise wants to do that, going as far as imitating Kyra Sedgwick’s Brenda Lee Johnson from The Closer and claiming to be sick to get exclusive access. Unfortunately, they’re not allowed back, although they get an idea: the tour bus. Tina and Louise sneak on and hide in the hamper, thinking that they’ll get autographs (Tina wants Griffin to sign her eyelids) and other things (Louise still wants to slap Boo Boo) for their trouble. To their surprise the bus begins moving, but they’re found out once Boo Boo is put in his booster seat. While Louise does get her slap in, Tina walks away with a couple of clothing souvenirs for her troubles, plus a ride home from Aunt Gayle. During the ride, Louise expresses admiration for Tina not going crazy over having so many crushes and tells her sister that this is the last time she’ll be having a crush.

Table Scaping 4 Dummies
Gene has made it to the regional finals in table scaping, the only non-athletic extracurricular activity his school offers. Table scaping combines table setting with themes and costumes, which Gene defeated Andy and Ollie in by creating a “Dump Up the Volume” dinner, complete with dump truck bus boy. While Linda hits the mini-croissant bar, Gene and Bob scope out the competition, including Oscar, whose Marilyn Monroe scene looks quite intimidating. Fortunately, Gene came prepared with a magic-themed table, complete with ice cream shazam-wiches, and makes it to the top four with Oscar. However, he didn’t read far enough in the rules to notice that he had to have a second table ready to prepare.

By this time, Bob and Linda have gone from preparing their son from the let down of losing to thinking that he has a shot, so they scramble to figure out what they can do for the table. Linda dumps her purse out and comes up with a “Lady of the Night” meal that features lipstick, pepper spray, and baby carrots, though it’s ultimately rejected. So what was Gene’s second table?

The Menstruant, a table that consisted of tampons and strawberry jam. It pales in comparison to Oscar’s moon-scape, landing him in fourth place, but that’s not so bad for two reasons. Oscar didn’t win, either, so it’s like the Belchers did win, and none of the kids had every gotten fourth place in anything. Satisfied with how everything went down, Gene is already thinking about next year’s competition. The theme? Baby Jessica, where you search for your meal for two days while the nation watches.

Additional thoughts and observations:
-“I don’t set where I eat.”
-“I’ve never ridden with this many hot dogs before.”
-“Ugh, no wonder no one likes women.”
-“I wanna give him things!”
-“He lives in a shell and he’s cute as hell.”
-“Slapabama, here we come!”
-“Is booster seat code for drugs?”
-“I put my bra on one boob a time like everybody else.”
-I like how this episode brought Louise closer to a realistic pre-teen girl. I’m all for her budding sociopathic tendencies and think that she can be a pretty great character, but she was becoming a bit too broad for an animated show this grounded.
-Gayle pooped her pants at the cell phone store, which I hope they show an actual flashback to someday.
-Great Louise moments in this episode: her trying to do Tina’s signature groan, her Brenda Lee Johnson impression (which almost literally killed me), and the horrified scream when she realizes she likes Boo Boo.
-If you want an encapsulation of what I like about Bob’s Burgers, it’s Tina sleeping with the clothes on her head and Linda not commenting on it. She accepts her kids as they are, weirdness and all, and it’s really refreshing to have a mom like that on TV.
-I didn’t get the full line, but I loved Tina suggesting they hide in the bus’ microwave and Louise telling her that “yeah, maybe if we were six inches tall”. Amazing.
-Leslie and Zeek now have an endangered box turtle. Lord help it.
-Next week on Bob’s Burgers: Bob bonds with Louise during a school field trip, while Gene’s on the hunt for exhibits that feature female anatomy, Tina questions her dorkiness, and Linda chants along with striking museum workers.