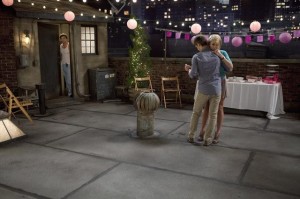 Ahead of its second season premiere, ABC Family comedy Baby Daddy will be having a marathon of its 10-episode first season. Beginning on Monday, May 27th at 2:00 p.m., viewers will be able to watch as bachelor Ben discovers that he fathered a child with a one night stand, throwing his life into a different direction than he expected it would go. With the help of his childhood friend, two roommates, and mother, Ben will have to learn how to be a parent and, for once in his life, put someone before himself.

Listed below are the times, titles, and descriptions for each episode in the Baby Daddy marathon.

2:00 p.m. – “Pilot”
Bachelor Ben discovers he’s a father when his ex-girlfriend leaves their baby girl on his doorstep in the series premiere of this comedy about a young man raising a baby with assistance from his family and friends.

4:00 p.m. – “Married to the Job”
Ben asks Riley to pretend they’re married in order to impress his potential new boss.

4:30 p.m. – “Take Her Out of the Ballgame”
Riley becomes the captain of Ben’s softball team and pushes the team too hard. Meanwhile, Bonnie begins a romance with Danny’s coach; and Emma develops an aversion to eating.

5:00 p.m. – “May the Best Friend Win”
Ben and Tucker vie for the same woman’s affections. Meanwhile, Danny gets public-speaking tips from Riley; and Bonnie enters the world of online dating.

5:30 p.m. – “The Daddy Whisperer”
Ben receives coaching from a supermom, who secretly has another reason for meeting with him. Elsewhere, Bonnie and Riley get accused of shoplifting when Emma grabs items in a store.

6:30 p.m. – “Something Borrowed, Something Ben”
Riley prepares to be a maid of honor and takes her duties seriously, while Ben expects the wedding to be lackluster and tries to add some excitement to it.

The second season of Baby Daddy premieres Wednesday, May 29th at 8:30 on ABC Family. The show has already been renewed for a third season.