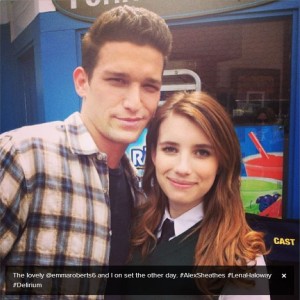 I haven’t read the YA book on which the pilot is based, but I just put it on my my must read list. With a cast like this, who would want to miss out?

Delirium is a book written by Lauren Oliver and adapted for television by Karyn Usher. The plot? In a dystopian future (is there any other kind?) at the age of 18 all humans must undergo a procedure that removes, via what is essentially a lobotomy, love from the brain, because it’s been considered a disease and a cure has been “found.” That sure gives lovesick a new meaning, doesn’t it?

Those who escape and don’t get the procedure live on the outskirts of society and are considered “invalids.” The book in question focuses on Lena (Emma Roberts!), whose mother committed suicide because she could not be cured. Just weeks away from receiving the cure herself, Lena falls in love with Alex (Daren Kagasoff, the best thing from Secret Life of the American Teenager) who has been living with society, although he’s an “invalid” himself.

I’m just guessing here, but I don’t think it’s  a stretch to think the series will be based upon Alex saving Lena from receiving the “cure” and the two of them either going on the run or trying to fit in with society and what happens to their lives from there. I’m going to read the book for fear the pilot won’t make it to series, but I’m also afraid the series will differ too much from the book and disappointment will be inevitable. Oh, who am I kidding. With Emma and Daren (really, is that a dream couple in the making or am I totally missing the mark here?) there is little that could go wrong with the love story aspect of Delirium.

From what I’ve read there are already considerable differences between the book and the script. In the script, it’s Lena’s father who dies, making her long for the cure so that she doesn’t suffer needlessly from Deliria (lovesickness?), new characters are introduced to move plot along and a character that isn’t introduced until further into the series makes his entrance in the first book. Finally – the entire first book is played out during the pilot. That’s a lot of material to cover.

Delirium sounds a lot like a modern day Logan’s Run with a twist. They don’t kill you, but they might as well, because what good is life without love? The premise is fantastic, as is the cast. Other cast members include Billy Campbell (The Killing, 4400), Gregg Sulkin (Pretty Little Liars), Michael Michele (ER) and Corey Reynolds (The Closer). The pedigree alone should green-light the series!

I’ve been able to gather some photos from the web, Twitter and Instagram, showing some movement on the set. Let’s keep our fingers crossed this comes to fruition. One things it has going for it that not a lot of FOX shows do – the power of social media. One quick search for #Delirium on Twitter and I was overwhelmed! Enjoy!