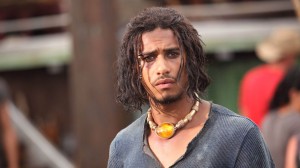 After being delayed from its original April launch date, Sinbad will finally get to premiere stateside, as Syfy has revealed that the Sky import is set to premiere Saturday, June 8th at 9:00. The 12-episode series follows the  sea journey of flawed hero Sinbad, who embarks on a quest to rid himself of a curse and embrace his destiny, as he is forced to flee from his home town of Basra. Once on board The Providence, he encounters taciturn Norwegian sailors, agile thieves, and haughty aristocrats, as well as the odd-ball cook and cerebral doctor that work for the captain.

Sinbad and Primeval: New World join a growing list of international series that Syfy has acquired in recent years, as Lost Girl will be returning for a fourth season in 2014, Continuum picks back up on June 7th for its second season, and Merlin is set to wrap its five season run on May 31st. Should one or both be successful, it could open the door for Syfy to continue bringing in sci-fi/fantasy/horror series that American viewers might not have gotten the chance to see otherwise. In addition, it could open up another night for the network to experiment with; Saturdays on Syfy have become synonymous with made-for-TV movies, but they might opt to introduce more original scripted programming in between bursts of movies. That would keep up any ratings momentum garnered and allow the network to boast about the amount of content they’re providing, as well as potentially give shows that have weakened a final resting place for their last season/episodes.

Do you like Syfy trying to inject original scripted series into Saturday nights? If Sinbad and Primeval: New World prove to be successes, will this mean more dramas on the network will find their way to Saturday nights? Are there any other international sci-fi series that you’d like to see Syfy acquire?