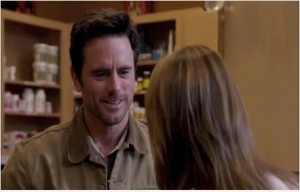 Teddy was quoting Churchill? The worst part of Nashville continues to be the political aspect, and it appears that even though Rayna will be dissolving her marriage to the Mayor of Nashville, the series won’t be cutting its ties with the lack of political intrigue. The only reason it seemed even remotely intriguing was because Rayna’s life was involved and her marriage was threatened. Take away that threat an with it goes any interest in the city’s politics. If I’m wrong, I’m willing to listen to your reasoning, but make it a sound argument.

They’ve succeeded in making me feel sorry for Avery. That crap that Dominic played for Avery was….crap. It was pop and not pop I’d listen to any more than Avery thought he would, and I wasn’t expected to play it. The world of music seems even more difficult to adhere to than that of acting. When you sign a contract you’re basically the bitch of the record label. It would seem you could quit an acting job a lot easier than you can get out of a music contract. When Avery was fighting against the scowling eyes of Dominic for his very soul, I hoped that he might be the other act Rayna chose for her new label. I know, right? Wishing for something that good for Avery doesn’t seem quite right, does it? When you get right down to it he was just a kid looking for fame and fortune, let it overtake him in a bad way and his bad side (very easily) won out.

It was probably his best episode to date, a real character builder, because he wasn’t messing around. There’s nothing left from the older Avery to bank on – he burned it all. When he started out at the Bluebird again, singing a solo song in a completely different style, quite nice, as well – Avery Barksdale! – my mind came back to Rayna’s label.

As Juliette struggles to find herself, one of her biggest fights is within herself and accepting that she’s her mother’s daughter. That’s a fear we all have, but her especially given her mother’s alcoholism and Juliette’s rotten childhood. She felt the full weight of that past come crashing down upon her when the impromptu concert she put on fell apart, injuring many of her young fans including Rayna’s daughters. As she tried to distance herself from the incident, she realized how easy it would be for her to become her mother and take no responsibility for her actions at all. Embracing her mother, her past and her treatment of everything that came with it was a giant leap for Juliette, and going to the hospital to cover the medical bills for all of those injured would go a long way to show the public how seriously she’s taking her responsibility as an entertainer.

Gunnar had the expected meltdown, but it had unexpected consequences. At first I thought he was going to lose the girl. Scarlett was forgiving and understanding as is her way. Missing his appointment with the new Rayna Jaymes label, however, lost him an opportunity to join Scarlett as an act on the label. She was offered a solo spot. Which, again, had me wondering about Avery’s future.

Finally, Deacon was not only busy rescuing his niece’s friend from a world of regret, he was bonding with his new puppy, a dog named Sue, and confounding one of the newest residents of Nashville, a veterinarian who caught his eye and joined him in bed before they ever had the first date they were aiming toward.  He made plans to right that wrong before the episode was over, but previews for upcoming episodes show Deacon and Rayna getting reacquainted in a way that might make the vet feel a little less than welcome. With their history, I’m rooting for the vet. Much like the puppy, I didn’t catch her name, but I liked her and she was a good match for Deacon.

What did you think of the return of Nashville? Did it live up to expectations? Here’s hoping we see an uptick in the ratings instead of the steady downward trend we were experiencing before the hiatus.