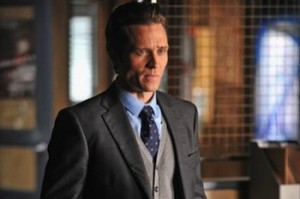 “The Wild Rover” brought a new meaning to the term, death by chocolate. Our victim, Jimmy the baker was found in a vat of chocolate. If I were ever to be found dead face down in something, I’d prefer it to be chocolate.

This episode gave us some backstory on Det. Kevin Ryan. I’ll admit I was a little skeptical when I first heard we were getting a backstory episode. Esposito’s backstory episode wasn’t really a favourite of mine. Boy, did my scepticism disappear quickly. I really loved “The Wild Rover” and will probably watch it many more times. We got great Jenny and Kevin moments, a cute Javier moment where he couldn’t pronounce the name Siobhan. I myself had the hardest time pronouncing the name when Ringer first premiered. We got great Kevin moments while he was pretending to be Fenton O’Connell, an undercover role he assumed for 14 months with the Irish mob and of course fantastic Caskett moments.

First of all, damn Siobhan! I haven’t seen a slap that hard in quite a while. Too bad Ryan a.k.a Fenton was on the receiving end of it, both slaps actually. I don’t know why, but I felt a little bad for Siobhan. Here she thought Fenton (Kevin) went into hiding 7 years ago without a word, just a note on the dresser. Now she learns he’s a cop. I totally understood her resentment towards Kevin.

I’m sure I wasn’t the only one who thought Ryan was looking quite sexy with his new I’m going undercover haircut. I was really feeling horrible for Jenny though. I know we don’t see her that often, but seeing her cry while Ryan left made me so sad. Here they are trying to conceive a baby and Ryan goes undercover in a dangerous situation. I would have been freaking out if I were in Jenny’s shoes.

So, who else googled Luke 15:32? You know I did. “It was fitting to celebrate and be glad, for this your brother was dead, and is alive; he was lost, and is found.” I’m not a religious person, but I like this.

That close moment between Ryan and Siobhan got my heart racing. I actually said “Don’t do it Ryan, don’t do it!” I really didn’t think Kevin would cheat on Jenny but that moment was a little bit too close for comfort for me. I loved that Beckett and Jenny shared a moment. I get that Ryan wanted to do the right thing and get the bible but Jenny was so scared.

All in all, this episode had me on edge the entire time. I really had no idea where they were going with it and I loved it. I hate when episodes are predictable. I was totally caught off guard by the reveal that Maggie, Liam’s wife killed Jimmy.  I thought Liam would have been revealed as the killer.

I really loved this fearless side to Ryan. I want to see more. Especially Ryan playing pool. Damn, he could play! That whole sequence before Ryan revealed he was a cop was awesome. This episode really showed me what a great actor Seamus Dever is.

Now for some Caskett goodness. I laughed out loud when Beckett rejected Castle’s coffee. Beckett was still asking who Jordan was and Castle wasn’t spilling. Apparently Castle talks in his sleep and was repeating the name Jordan. 14 times to be exact. I loved how Kate said she’d just interrogate Castle in his sleep. This apparently works by the way. Not that I’ve ever tried…

Castle didn’t want to tell Beckett who Jordan was because what if Beckett didn’t like what she saw. Beckett countered with, “what happens if you don’t let me look?” Castle finally told Beckett who Jordan was. Jordan was a defunct car company. Back in boarding school, Castle was on the verge of flunking out and paid someone to write a term paper on the Jordan Motor Company. Castle felt like a fraud and it’s obvious that this is still weighing on his mind. I thought it was quite a role reversal between Castle and Beckett. Here we have Castle with the walls and Beckett trying to break them down. I thought it was so sad that Castle didn’t want this to change how Beckett felt about him. I don’t see how it would anyways, and Beckett told him “Your right Castle. It does change how I see you, makes me like you a little bit more.” If you say that wasn’t the sweetest thing, you’re wrong. Then the moment us Caskett lovers never thought we’d see, a well lit kiss!!!!!!!! FINALLY! Fandom rejoice! It looks like the Castle crew received the 500 light bulbs I sent. (Just Kidding) You have no idea how happy this made me.

My joy from the kiss continued with the news of Jenny’s pregnancy. I’m just so happy for Kevin and Jenny.  All in all, great episode. Lastly, a question for my fellow Chucksters turned Castle lovers. When Beckett said Agent Walker, was anyone else’s first thought Sarah Walker?

The countdown is on for the 100th episode. I am so excited! Is it Monday yet?

Observation of the night: Beckett and her finger wagging.