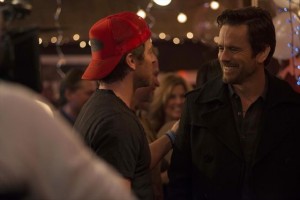 For years, Deacon has defined himself through music, specifically his love of playing it live. No matter the venue, some of the greatest joy in his life has been experienced on stage with his guitar, playing his heart out and leaving it all in front of an audience. But how long can the Nashville picker continue finding the same passion in going on the road? Deacon may have never been a fan of everything that it takes for a tour to go on, but the hour or two that he was on stage always made up for any off-stage stress and rejuvenated him for the next round of loading, unloading, and everything in between. Could he actually survive (and thrive) while not getting a dose of stage lights on a regular basis?

Listed below are the dates, titles, and descriptions of the next two episodes of Nashville.

Wednesday, March 27th – “When You’re Tired of Breaking Other Hearts”
Katie Couric guest stars as herself when Rayna appears on the “Katie” show, trying to set the record straight about her marriage and balancing her career with motherhood. Juliette attempts to take her album launch into her own hands but it backfires when she tweets out a surprise concert location. Maddie lies to Teddy about her whereabouts — with dangerous consequences — and Deacon is drawn to his dog’s pretty new veterinarian, Stacey. Meanwhile Avery tries to control his musical destiny by flouting Dominic and Marilyn, and things are awkward between Scarlett and Gunnar, as he continues to process his brother’s death.

Wednesday, April 6th – “I Saw the Light”
Rayna takes her children and sister with her on tour in NYC, but Rayna doesn’t like the influence Juliette is having on her daughters. Meanwhile Dante gives Juliette some career guidance that helps her see him in a whole new way; Deacon’s feelings for Stacey force him to reconsider his life on the road; a hunky new neighbor, Will (Chris Carmack), befriends Gunnar and Scarlett; Gunnar is thrown by Scarlett’s hiding information from him; Lamar threatens Peggy; and Avery jeopardizes his own future.

Do you think that Will and Scarlett will get together? Would Deacon be happy not going on the road regularly? Is Avery smart to fight for his sound?