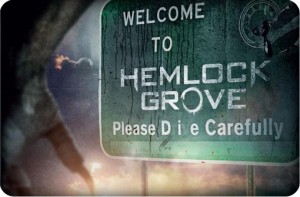 I’ve been waiting for Hemlock Grove to pop up on Netflix since the first announcement back in 2012. Being a huge fan of genre series, horror in particular, it didn’t take me long to decide a 13 episode investment would be right up my alley. Add in the alluring Famke Janssen (X-Men, Taken, Nip/Tuck) and – SOLD!

The story itself surrounds the murder of a local girl in Hemlock Grove, Pennsylvania, outside an abandoned mill owned by the local well-to-do Godfrey family who run the town. At the same time the murder occurs, a Gypsy kid (Liboiron) moves to town, befriends one of the Godrery sons and becomes the center of rumors that he might be a werewolf. Apparently there is no shortage of monsters in this series, whether human or beast and the  overall theme is: what separates a human from a monster?

Based upon the novel by the same name written by Brian McGreevy, who adapted his own book for the series, the full novelization is covered in the 13 hours scheduled to arrive on Netflix on April 19th. Nonetheless, a second season has been pitched.

It reminds me a lot of what was attempted with the brilliant Harper’s Island in 2009. While it was a summer program and aired on network television, it died a slow, painful death – although it was allowed to air all of it’s episodes. The human/monster conundrum is quite popular these days and I’m surprised a network didn’t aim to pick up Hemlock Grove given its cast, producers and material. Kudos to Netflix for giving it a chance.

Enjoy the latest clip and stand by your Netflix enabled large screen TV on April 19th for a marathon of Hemlock Grove.