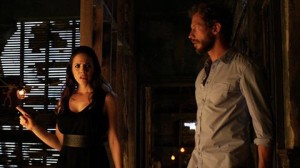 Bo and Kenzi are chasing an Ooglung named Keith whose sweat has been demanded by Stella. The pheromones are said to help Bo during her dawning, which is happening in about an hour. He escapes into a warehouse; Bo and Kenzi follow him where they find Stella and a lingerie photo shoot featuring scantily clad models of both sexes. She tells Bo that this is her pre-dawning snack and that she shouldn’t go into the temple on an empty stomach, but Bo rejects the offer on grounds that she will never take a human life for pleasure again. Even though she’s hungry and extremely tempted, Bo decides to live her life her way, not according to ancient Fae rules and guidelines.

Meanwhile, Kenzi is becoming more worried about the possibility that Bo doesn’t come out of the temple. She doesn’t know how she’s go on or where she’d go without having Bo around and Stella doesn’t make things any better by telling her what happens to unaligned humans in the Fae world. Fortunately, Trick calms her down and consoles her with talk of her being family and always having a place with him.

The day of the dawning, everyone gathers at the Dal, including Lauren, who has been working night and day to come up with an antidote for what Bo’s going through and hasn’t returned the 27 texts that Bo’s sent. Following a toast, Trick takes Bo back to his office where he draws a symbol on her forehead with white oleander signifying purity of intention and deed when it comes to the temple. Bo tries to thank him for everything he’s done for her, but he won’t entertain the thought of her not coming back and takes her out to the bar for Stella to read the invitation. Bo, of course, accepts, only to find out that she needs to pick an aid and, in order to be given a weapon, declare a side. She remains neutral and Dyson volunteers to accompany her into the temple, which Bo is hesitant about but Lauren ultimately okays. The two share a kiss before Bo puts a flower into a bowl of liquid and opens up the portal to the temple; she and Dyson are sucked in together.

They’re transported to an exact replica of the Dal and meet the Caretaker, a man dressed as a janitor who welcomes them to the dawning. He explains that the object is to get out of the temple by finding a key to unlock another portal; should Bo reject it or be defeated by the guardian that protects it, she’ll be turned into an underfae. Dyson drags Bo through the Dal door and into a replica of her home with Kenzi  where everything seems a little off. When they hear the sounds of the guardian in another room, he tries getting her to come with him to get the key, but she’s perplexed at why he continues pulling her toward the danger, particularly once the guardian (a blind Fae with horns) comes storming out and scratches his chest badly. They escape again, this time into the gym; she questions why the hell he wanted to be here in the first place and he tells her he loves her, prompting her to punch him in the arm. She thinks he’s taking this as a suicide mission, but he tells her that he’s learned more from her in the past three years than he did over the prior 1500 and that he’s doing for her what he knows she’d do for him.

Just then, the guardian comes barreling in with the key, which Bo knocks loose and puts her hand on it. As the guardian was touching her while she touched the key, he goes with her, leaving Dyson to interrogate the Caretaker about how he can catch up with Bo. In the meantime, Bo is in another level of the temple, this time playing cops with Lauren, her ex in the alternate timeline. Bo’s taking anti-psychotics and working with a CI (Kenzi, or “McKenzie” as Bo calls her) who is getting cold feet about testifying against a noted crime family; she’s the key to getting them put away for a long, long time, though Bo has no luck in convincing her to put her neck out.

While the Caretaker is busy trying to get Dyson to accept his fate in being trapped in the temple, where time is immaterial, Bo has continued exploring the temple. Now she’s in suburbia with a headband-clad Tamsin acting as her Susie Homemaker neighbor…and Dyson as her doctor husband, the person responsible for getting her on anti-psychotics. She wants to stop taking her medication, whereas he thinks it’s been working for her and kept her from doing the type of crazy things she did while off it. Bo heads to get a glass of water and finds herself in another level of the temple; clad in a white gown, she’s looking in on a nursery with a man singing a lullaby to a baby. A lullaby she knows. The man is her birth father and he leaves baby her in the care of her birth mother, only for Efa to slit her throat.

The scene shifts to Bo finding out she’s pregnant by Dyson. As she experiences sharp stomach pains, he reminds her that this isn’t real – none of what’s happened in the temple is real and that the pains are a sign of her devolution. It’s then that they figure out what the key actually is; it’s Dyson. The number one rule of the temple is that for every two people who go in together, only one goes out, so Dyson gets Bo to stab him in the heart to collect the key and leave. She stabs him and gets the key, opening the portal and giving her a way home. However, in the midst of her emotional reaction to Dyson being dead, Bo decides to play things her own way. She gets some of his blood and draws the symbol that Trick drew on her forehead, places one hand on it and the other on Dyson, and transports the two of them back to the Dal. Being that she couldn’t take him with her through the portal, this was the only way to give him a shot at being saved.

Once back, Bo and Lauren both try to revive Dyson until Bo gives in to the darkness and feeds from Stella, Kenzi, Lauren, and Trick. She passes that energy to Dyson and he comes back alive.

Additional thoughts and observations:
-“Ugh, where’s the Acme Company when you need them?”
-“Revolting…is that brand name liquor?”
-“This is not my worried face. This is my game face.”
-“Anyway, welcome to the dawning, etcetera, etcetera…”
-“I’m just a wolf standing in front of a succubus…”
-Can we talk about how absolutely devastating Dyson’s “But ask me again in 100 years when things are different” was? Because my heart may have literally shattered once he said that. Goodness. And I’m not even a shipper!
-Apologies for not getting recaps of the last two episodes up. Technical difficulties and all that. I will say that I really enjoyed Bo/Tamin and that Bo’s final talk with her adopted mother was extremely touching.
-The early credits were a nice change of pace. Usually there’s a decent chunk of time for the cold open, but after only a minute or two tonight, they popped up. Definitely clued me in on something major about to go down.
-I didn’t get the quote down, but the way Bo mentioned her kiss with Tamsin and then sprinted away from Kenzi was a delight. I kind of hope the next episode opens with them gossiping about everything that happened with the Valkyrie.
-Very, very, very little Hale this season. Disappointing.
-So Kenzi might be Fae. I don’t think I’m a fan of that. As much as the thought of Kenzi having powers tickles me, a supernatural show can’t have every character be supernatural. You need a Bo to make the show, but you also need a Kenzi to keep the show grounded.
-I find Evil!Bo to be partially awesome/intimidating and partially silly. I think for the weird voice effects that they use on her dialogue. The way she saved Dyson tonight, though, was impressive.
-For now, Lauren is taking care of Dyson and Stella wants Trick to go on vacation with her to Scotland. He has other things on his mind, as a new threat is looming.
-Next week on Lost Girl: Bo receives news that’s hard to take and goes undercover at an urban camp for at-risk youths to catch a Fae serial killer