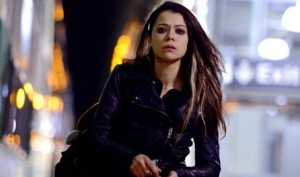 Sarah has never been one to fit in. The orphan has spent much of her life on the outside of mainstream society, never truly by fitting in or feeling comfortable with her identity and making her home on the margins and in the shadows. It’s a lonely existence for the young girl, only aided by her stepbrother and foster mother, but coming up on Orphan Black, that loneliness is about become more appealing once Sarah becomes clued in on something greater than herself.

After witnessing a girl named Beth commit suicide, Sarah sees that the dead body looks exactly like her – unnervingly so. She soon finds out that the two of them are clones and they’re not the only ones out there, but learning the existence of a conspiracy has put her life in danger, so Sarah decides to “become” the woman who died and assume her identity while looking for information about what’s going on. Just how deep does the conspiracy run? Is there anyone in Sarah’s life that is 100% trustworthy? What would happen to her if someone found out that Beth doesn’t exist anymore?

Will you be watching Orphan Black this season? How do you think Sarah will react to finding out that she’s a part of a grand conspiracy involving cloning? Who can she turn to at a time like this?