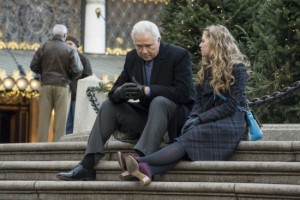 The investigation into the death of Vivian Bowers has put Joanna’s life in danger on more than one occasion and broken the already dysfunctional Bowers family beyond repair. Old memories and festering  resentments have been dragged out during this season of Deception, making the New York elite face up to the role they played in the death of Vivian. So much has been left unresolved regarding their relationships with one another, but coming up on Deception, the person/people responsible for Vivian’s murder will be revealed, hopefully giving the family the peace needed to finally move on.

Listed below are the dates, titles, and descriptions of the final three episodes of Deception.

Monday,  March 4th – “Good Luck with Your Death”
Robert begins to suspect Joanna’s true motives for coming back into their lives and flies her mother, Beverly, to New York, to help uncover the truth. Meanwhile, Joanna investigates Julian’s girlfriend who works for a rival drug company and finds some suspicious information. Mia offers to save Haverstock by donating her bone marrow but then discovers his true motivation. Sofia pays a visit to a dark character from her past in prison.

Monday,  March 11th – “You’re the Bad Guy”
After Will fires Joanna for sleeping with Julian, she uncovers video tapes of Vivian’s therapy sessions. Working with the FBI, Julian wears a wire to gain evidence against Audrey. Edward turns himself in for the murder of Kimberly Yaeger. With Haverstock’s help, Wyatt is released from prison and confronts Sofia. Mia takes Joanna’s advice and donates her bone marrow to her birth father.

Monday,  March 18th – “I’ll Start with the Hillbilly” (Finale)
Edward makes a tough decision regarding his wife’s condition and seeks revenge. Vivian’s murder case is reopened as new information comes out, and the identity of her murderer is revealed.

What will Joanna find out about Julian’s girlfriend? Why did Edward turn himself in for the murder? Who do you think killed Vivian Bowers?