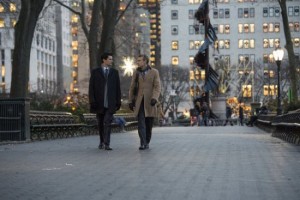 Now that Robert knows that Joanna failed her polygraph and that she’s hiding something from him, the pharmaceutical tycoon will do anything to suss out her real reasoning for showing up after Vivian’s death and staying with the family. Until he found out about the test results last week on Deception, Robert assumed that Joanna was merely a lost woman in need of a new start in a safe environment; though part of the reason for his open heart toward her had to do with Joanna representing who Vivian used to be, Robert always defended the undercover cop and seemed to want to do well by her. However, all the guilt in the world over what happened with Vivian won’t get him to back down from looking into Joanna’s background.

On tonight’ s episode of Deception, Robert has flown Joanna’s mother into town, which could potentially blow her cover and put her in danger. The Bowers patriarch has shown that he has no problem with threatening people who cross him and with the acquisition of the golf club that Edward used to kill Kimberly Yaeger, he’s just as likely to manipulate family as he is anyone else; doing something to silence Joanna and protect the Bowers family name (and fortune) wouldn’t be much of a problem, then.  If her mother can keep any incriminating information close to the vest, Joanna may be able to finish this investigation out after all and bring the person/people responsible for Vivian’s death to justice. However, if her identity becomes breached, she might have to abort the mission for her own safety and find redemption for Vivian in another way.

Can Joanna hold off Robert long enough to find the answers that those who loved Vivian need? Or will his power, influence, and cold-blooded nature prove to be too much for her to overcome?

What will Joanna’s mother reveal to Robert? Should Joanna have come back to the Bowers home? Why did Haverstock really ask Mia for the transplant?