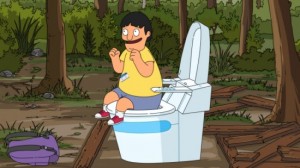 Gene will get to take care of a baby for his health class – a baby made of a sack of flour. Unfortunately, before Linda can officially become a grandmother, her only son kills three flour babies (including one not his) and fails the assignment before even beginning it. Discouraged, he walks home through the woods and stumbles upon a voice-activated talking toilet that had fallen out of a delivery truck the night before. A talking toilet that tells pun-y jokes, warms his buns, and plays classical music when the “bidet” option is selected.

After spending all of his evening “playing” with his new friend, Gene gives him a water refreshment and heads home, only to be stopped (and chased) by a strange man. The man turns out to be Max Flush, a truck driver looking for the toilet reportedly worth $14,000; although Gene gets away initially, Max shows up at the restaurant the next day after finding a name tag from one of the flour children that Gene killed that said “Baby Boy Belcher”. With the toilet having only three more hours of battery life and needing an auxiliary power supply, Gene rallies the troops (Louise, Tina, Andy, Ollie, Zeek, and Jimmy Jr.) to pull a fast one on Max and get him away long enough for them to recharge the toilet and find a home for it. They lure him onto a ship and tie ropes to each of their bikes so they can pull the toilet to a power source; Max ended up swimming his way back and with the help of a cut off bridge, manages to subdue Gene.

Bob has to go to court to contest a traffic ticket and he doesn’t have an appropriate suit to wear. Mort ends up loaning him a spare suit from one of the funeral home families, which turns Bob from an ordinary schlub into someone who gets treated with a dignity and respect that he’s not used to. The ticket gets waved, he gets called “gentleman”, and several women come into the restaurant to flirt with him before Linda scoots them away. In addition, the suit gets him and Linda a table at Beville’s, a fancy restaurant where they end up getting drunk together, not eating, and making out on the scenic cab ride home.

While on the way home, they nearly (literally) run into Gene and the toilet before getting the kids (and the toilet) and taking it to a local coffee shop to find a power source. Max follows them there and nearly gets the toilet to himself before the police show up and apprehend him (with the help of Louise), leaving the toilet to die; a later news report indicates that Max Flush wasn’t Max Flush. He was Tim Jones aka ‘The Bathroom Burglar” and that the toilet had been meant for someone on King’s Head Island. Gene’s down in the dumps about being parted from the toilet and goes to the dock to see it one last time. There, he tries to tell the toilet that he loves it and the toilet instructs him to vomit now, tearing him up even more.

And Bob’s suit? It belonged to the father of the cop that arrested time, meaning that Bob went from a crisp gray suit to his birthday suit in order to protect himself.

Additional thoughts and observations:
-“Aw, my little baby’s having babies. I’m a sexy grandma.”
-“You’ve got a suit that won’t acquit.”
-“Go have a seat, Gene, and wipe that baby off your face.”
-“Say nuclear wiener.”
-“And his name is Bob Burger.”
-“For 14 grand, I’d let that toilet poop on me.”
-Very sweet E.T. homage, this was. The shot of Gene and the toilet in front of the moon was especially good.
-I don’t know about you, but I’d definitely pay 14 grand for a toilet that’d play me a little Eddie Money.
-Favorite gag: either Andy and Ollie trying to carry each other at the same time or Linda acting out “Suit Cemetery” to Mort and Teddy.
-However, I laughed the hardest at Teddy thinking Bob’s last name was Burger. Too good.
-Even the toilet rejected Tina’s advances.
-How about Jon Hamm voicing the toilet?
-Next week on Bob’s Burgers: Louise attempts to recreate a famous Thomas Edison experiment. With an elephant named Topsy.