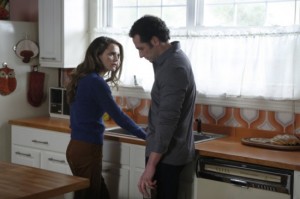 This season on The Americans, Philip’s relationship with Elizabeth has taken two steps back for every step forward. For every time that the couple shared a moment meant to bond them together, a secret has come out that made that moment moot and damaged the delicate trust that they’ve developed. While they’ve shown that they’re able to work together through even the toughest of personal conditions (i.e. Elizabeth’s affair with Gregory being exposed, the argument over when they should do with Timochev), one has to wonder when their breaking point would be.

Coming up on The Americans, the two agents will experience yet another severe blow to both their working relationship and their marriage, but will it be the one that drives them apart for good? Or will their love of their homeland and desire to prove themselves valuable assets offset any tension that may arise?

Listed below are the dates, titles, and descriptions for the next two episodes of The Americans, which has already been renewed for a second season.

Wednesday, March 13th – “Duty and Honor”
Philip and Elizabeth’s troubled marriage is further tested when a mission to discredit a Polish pro-democracy leader reunites Philip with his old flame.

Wednesday, March 20th – “Mutually Assured Destruction”
Philip and Elizabeth must stop an assassin from taking out key US scientists, while Stan and the FBI hunt the same man. Grannie shocks Elizabeth with the truth of what happened between Philip and Irina in New York.

Interestingly, Elizabeth will now feel the same jealousy and hurt that Philip did about Gregory; her husband may not have gotten physical after hearing about the affair, but Elizabeth has proven to be the more aggressive of the two, willing to get violent quicker and unafraid of even the most intimidating of threats. Will finding out about Philip’s ex turn her violent streak toward him?

How will Elizabeth handle Philip reuniting with a former lover? Will the revelation from Grannie further drive the couple apart? When will Elizabeth and Philip achieve their next victory toward their cause?