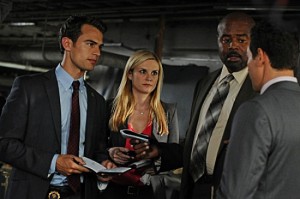 Golden Boy still has its golden time slot, as CBS has announced that they’re keeping the Greg Berlanti drama on Tuesday nights at 10:00 for the remainder of the season. The original plan had been to move the show to Fridays after the second episode aired on Tuesdays, but the modest debut followed by a small drop convinced them to let the show air in one slot. While the numbers for Golden Boy haven’t exactly been breakout, they’ve been slightly higher than Vegas, which is now moving to Fridays beginning April 5th at 9:00.

This isn’t necessarily the end of Vegas, but the 60’s drama’s renewal chances are fairly slim at this point. There’s an off-chance that it could perform strongly enough to garner additional episodes; however, with the episode order being cut to 21, the slumping ratings, and the dissipated hype, the numbers it puts up on Fridays will have to be that much better to earn a renewal. The show entered the season with much being made about Quaid coming to TV and the vibe of the pilot being different than anything on the network, a real shot for CBS to embrace the idea of having a serialized prestige drama. Although it draws a pretty hefty audience, the show gradually turned embraced its procedural nature and its 18-49 demo rating has been less than stellar.

Do you think that CBS made the right move in keeping Golden Boy on Tuesdays? Is this the final nail in the coffin of Vegas? If Vegas does get canceled, will CBS become more wary of straying from their (successful) formula?