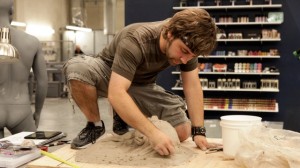 After seven weeks of two-headed giants, alien werewolves, and goblin kings, the Face Off cast has been cut in half. Now that the work room is decidedly less crowded and there’s no room to simply slip through the cracks anymore, it’s time to look toward the final three and see which of the remaining contestants have put themselves in the best position for victory. Can an underdog put together a run to challenge the top contenders a’la Nicole from last season? Or have we had a clear cut final three for some time?

The final seven have been divided into three categories depending on their status in the competition. The first group is who I feel are in the best position to make the final three, both in terms of performance thus far and artistic potential. Next comes two artists that could feasibly join the top group if they perform to their capabilities and one of the (presumed) top three stumbles late in the game. Finally, there are two artists on the chopping block with little to no chance of making it to the live finale. Each contestant has their accomplishments to this point listed, in addition to why they’re in the place they are and how they could move up or down, depending on where they are.

The Top Three (At This Point)
1. Kris
Wins: 3
Times in the Top: 1
Times in the Bottom: 0
The Good: Kris is on a major hot streak, winning three of the past four weeks and becoming a factor after spending the first three weeks of the competition in also-ran status. He’s performed well enough to never draw the ire of the judges, his personality has been genial enough to never be edited badly, and in each team challenge, his work has been singled out as being professional grade, visually interesting, and executed well. Kris doesn’t really have any gaping weaknesses in terms of what he can do in the workroom, as he’s a strong sculptor with a sophisticated color palette and plenty of imagination that he can channel – within reason.
The Bad: However, Kris hasn’t exactly lit up the screen during his time in the work room and his talking heads. He’s either the most centered, soft spoken artist they’ve had on the show or he’s not an interesting enough personality for them to feature often, which could stunt any chance of him taking home the victory in a live finale. If there’s no live finale, his edit to this point has been decidedly un-winner-like, so could a crash be coming soon? Plus, going from middle of the pack  to being an arguable favorite places expectations on his future work. Can he live up to the recent standard he’s set?

2. Anthony
Wins: 3 (1 Foundation win)
Times in the Top: 1
Times in the Bottom: 2
The Good: The beginning of the season belonged to Anthony, as he took home four wins in a row for his clean, technically strong work. His time management skills have been better than most this season and he very rarely gets rattled, which could help him outlast his opponents and take home a win, should they not be able to handle the moment. Also, the judges do like his aesthetic and know what he can do when he’s firing on all cylinders, so if he can live up to what he showed at the beginning of the season, he could become the favorite once again.
The Bad: Anthony’s been in the bottom for the past two weeks and seemingly lost the spark that he had at the beginning of the competition. It might be a case of being too good too early and never being able to live up to a standard that he set for himself with the judges, that success psyching him out to the point that it messed with how he approaches a challenge. Now that the chaff has mostly been culled, he won’t be able to fall back on those past accomplishments to keep him safe from elimination, so unless he course corrects in a hurry and brings his confidence back, the former favorite could be going home soon.

3. House
Wins: 0
Times in the Top: 4
Times in the Bottom: 0
The Good: House has been the most consistent of the upper tier of contestants this season. Though he’s yet to win a challenge, he’s been at or near the top of the leaderboard for the duration of season four, thanks in part to a keen eye for production design and a clear, confident point-of-view. He might be considered the most dangerous contestant remaining in the season for the fact that if one of the others fails to show up, they know that he will. House may not win, but he won’t beat himself and at this stage, that can be intimidating.
The Bad: The fact that he’s yet to win is troublesome and could be due to less than stellar execution of certain pieces. You could argue that House has the most interesting aesthetic of the remaining contestants, but no look has ever been fully and completely executed, meaning that either he needs to slightly pare down his ambition/control issues or he simply might be a better designer than an artist. If he can pull off a knockout piece in the coming weeks and go toe-to-toe with the other designers, I would be willing to move him up; until then, he’s a comfortable third in my book.

Next in Line:
4. Eric F.
Wins: 1 (1 Foundation win)
Times in the Top: 3
Times in the Bottom: 1
The Good: The Face Off judges have shown that they like people who take chances and Eric F. is the riskiest, most ambitious contestant of the season. He has consistently tried to outdo himself and expand the limits of what can be accomplished on the show with an in-your-face style that none of the others have. Couple that willingness to go big with a jovial, TV-friendly personality and he could be a winner that both fans and people in the industry would latch on to. Plus, if the show is looking to go for someone unlike each of their three winners, he’s their best bet for someone to make a splash after the season wraps.
The Bad: Eric F. gets in his own way and that will be his downfall. He goes for too much and can’t execute everything in his plan due to a lack of time/resources; he often puts what’ll look “cool” over what’s functional for filming and while he does go big, not every idea lands as well as it could. Wanting to (and being able to) do a lot of work in a little amount of time is a key trait of doing well on competitive reality TV, but disappointingly, Eric doesn’t know how to play the Face Off game and work within his means, opting to self-destruct vs. practicing smart time/workload management.

5. Wayne
Wins: 0
Times in the Top: 4
Times in the Bottom: 1
The Good: After beginning the season on a bum note, Wayne has become a competitor like House; he does what he does and he does it well, making it to top looks four of the last five weeks and getting pretty solid feedback  from the judges. Wayne could have easily folded early, but he’s improved as he’s gone on and proved to be a threat, so he has momentum on his side. He’s one of the better sculptors in the entire 14-person cast and he’s shown ingenuity, intelligence regarding form/design, and a willingness to go big without sacrificing the overall look. Additionally, he’s improved on his painting and has one of the more placid demeanors  of the remaining contestants, never having gotten into a workroom conflict and seemingly able to take criticism well.
The Bad: Like House, Wayne has yet to win anything, potentially a sign that while the judges do appreciate what he can do, they’ve not been as bowled over impressed as they’ve been with others. Consistency and having a strong baseline is one thing, but with the numbers this low, he’ll have to step up in order to have a chance to take home the title. When working alone, Wayne has shown poor time management skills that have dragged down his overall looks  on more than one occasion. Going forward, being able to delegate and figure out how to spend your time become much more important, so if he wants to crack the top three, he’s going to have to have a clearer idea of what he’s doing.

On the Chopping Block:
6. Eric Z.
Wins: 0 (1 Foundation win)
Times in the Top: 1
Times in the Bottom: 2
The Good: Eric’s all about potential. He’s not been especially impressive during his time on the show, but there have been flashes of brilliance in some of his looks that hint at the type of artist he could be one day. He seems willing to learn and soak up as much information about doing make-up that he can, a good sign going forward and a hint that he might be ready to expand his field of vision and general aesthetic in the near future.
The Bad: The main problem with Eric is that he’s young and young artists tend to not set this competition on fire. Be it from a lack of references, inexperience in certain mediums, or simply being overmatched by more credentialed opponents, a young make-up artist has a certain Face Off shelf life and Eric’s might be up. After everything that happened with Autumn, he has a bigger microscope on his demeanor and the finished product that he puts on stage and if that’s not demonstrably better than what he’s been sending to the judges (okay/safe but nothing noteworthy), he’ll be in trouble. He might be more consistent and capable than many of the contestants of season four, but his highs haven’t reached the highs (or the ambition) of the people above him on this list, meaning that it could take some stumbling for him to make it through the double elimination next week.

7. Meagan
Wins: 0 (1 Foundation win)
Times in the Top: 2
Times in the Bottom: 3
The Good: Meagan’s the final female contestant remaining and in order to avoid the show becoming too male-heavy, that could buy her an additional week or two. She’s done well in team challenges, which gave her an immunity and her two trips into top looks, and if they pull out a beauty makeup while she’s still around, she could surprise with her longevity in this competition.
The Bad: Meagan’s talent level is decidedly below the other six contestants and she struggles when not paired with a strong partner in a team challenge or when having to work out of her comfort zone in an individual challenge. With the competition narrowing down to the best of the crop and three trips to the bottom to her credit, the additional pressure can’t be good for an already fragile workroom personality with a shaky, undefined aesthetic, meaning that it’ll be even more difficult for her to raise her game in hopes of sticking around. Had she applied for the show when it had a more diverse challenge allocation, she could have trudged her way to a top 5 or so  finish, but unfortunately, unless more than one person above her stumbles badly, her time on the Face Off stage is over.

Who do you think is the favorite at this point? How does the season four cast compare to past seasons? Which eliminated contestant would you like to see return for season five?