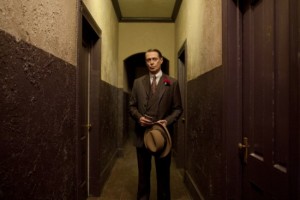 Deadline is reporting that HBO critical darling Boardwalk Empire has begun adding pieces to its upcoming fourth season. Joining the period drama as a series regular is Ron Livingston, who will be playing Roy Phillips, a wealthy out-of-town businessman who catches the eye of Gillian Darmody. After what happened with Gyp (and Roger) last season, one would assume that romance/men would be the last thing on Gillian’s mind right now, but Roy being wealthy offers a chance to get out of the madam business and she might have to take it. Additionally, him not being from Atlantic City could give her a place to go to get away from the gangster lifestyle, but is she ready to walk away from the danger once and for all?

Boardwalk Empire has also added two recurring players to its ever-crowded universe of crooks, thugs, and collateral damage. Domenick Lombardozzi will be playing Ralph Capone, Al Capone’s older brother, while Brian Geraghty is set to portray Loren Knox, a prohibition agent with ulterior motives newly assigned to Atlantic City. We don’t know yet how Ralph will be in comparison to Al, though with little brother’s tentative alliance with Nucky, he could quickly become a key figure on the boardwalk. If, of course, Nucky can continue to outsmart (or find the right price for) the feds, including Knox. But something tells me that the agent has more on his mind than making a quick buck.

Ron Livingston might be best known to TV audiences as Jack Berger, one of Carrie Bradshaw’s boyfriends on Sex and the City, but he’s appeared on the likes of Defying Gravity, The Practice, and Band of Brothers. Lombardozzi and Geraghty are also HBO alumni, with the former having portrayed Herc on The Wire and the latter completing a three-episode arc on True Blood last season.

The fourth season of Boardwalk Empire premieres this fall on HBO. Production is already underway.

Will you be watching Boardwalk Empire this season? What did you think about the recently completed third season? Who do you hope gets more focus during season four?