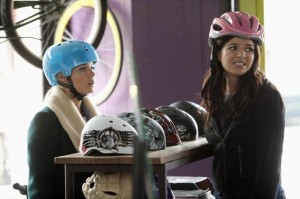 Penny may have finally met the right guy in Pete, but her gain is Max’s loss and he’s not taking to the diverted attention of his best friend. The two share an incredibly close bond and often bask/wallow in their single-dom together, so without her around to hang out and commiserate with, Max has to face the insecurities he has about his personal life on his own. Fortunately, he figures out a way to get back at Penny and not be left alone on the next episode of Happy Endings, S03E06 “To Serb with Love”.

That’s because he’s made a new friend – Nickel (well, Nicole), who he says is worth five times more than (a) Penny. However, Penny doesn’t get the full intention behind bringing another perky brunette with a quirky vocabulary around and thinks that Max wants her to help Nicole with her relationship problems. She then introduces her to Pete’s good-looking brother Jimmy, literally squeezing Max out of the way in the process. It’s one thing to lose a good friend to a new relationship, but it’s another to lose the friend you made to replace that friend in the same exact way, so Max will likely now be seeking some form of revenge against both Penny and Nickel.

Elsewhere on Happy Endings, Jane and Alex’s parents plan a party for the 20th anniversary of their business and Jane’s in charge of making the toast, which proves to be a problem as her dad doesn’t laugh. Meanwhile, Alex informs Dave that she hasn’t told her parents about their reunion.

Happy Endings airs Tuesday at 9:00 on ABC, with Don’t Trust the B—- in Apartment 23 following at 9:30. The episode will feature guest appearances from Nick Zano, Christopher McDonald, Julie Hagerty, Kulap Vilaysack, and Matthew Nicklaw.

Will Jane be able to make her dad laugh with her toast? Is a Nickel really worth five times as much as a Penny? Are Dave and Alex headed for a rough patch due to her failure to tell her parents about their rekindled relationship?