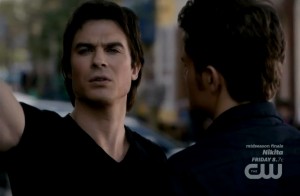 There were quite a few stories on Vampire Diaries that could use some chatting about from the episode, but none of them are even remotely as interesting as the Elena and Damon saga.

I suppose it’s all kinds of exciting if you’re a giant Tyler fan that he’s a pack master. Frankly, I find the whole plot line beyond boring. They’ve given me no reason to care. They keep breaking the sire bond between hybrids and Klaus. To what end? What’s their end game? To …. break away from Klaus? They aren’t going to kill him, even in a pack, so they can give up that notion. If they aren’t forced to act upon his wishes, why do they even care? As long as Elena is a vampire, Klaus can’t make more hybrids so they’re pretty much free to do as they please.

Of course, there is the big super secret plan that the Nutty Professor has up his freshly starched sleeve, but since he’s managed to make Phoebe Tonkin an unwelcome character when I was so hoping she would be something more, he’s yet another player that can scoot along. He’s ruined what could have been in Hayley and further destroyed an already greatly diminished Bonnie. They are sidelined, at best.

Klaus thought he had this wicked secret to share with Caroline that would rock the house to its core – Damon sired Elena and that’s why she was doing everything he said. It was a one in a million freak occurrence  Caroline said. But it could happen! They had to find out!

Nothing like another incredibly annoying jaunt back in time to determine that it’s not only happened before, but it’s happened to DAMON before. Seriously? One in a million? Are we to believe Damon has sired two million vampire babies? Yeah, I didn’t think so either. To go that route was a terrible miscarriage of storyline justice and to use Madeline Zima, who destroyed Hank Moody’s life on Californication as the sired vampire was even more insulting.

What good came of “We’ll Always Have Bourbon Street?” Damon proved, yet again, that he really loves Elena and doesn’t want her if he can only do so through nefarious methods. He learned siring a vampire doesn’t mean you control what they are feeling, only the way they act upon those feelings. Elena loves Damon. There is no longer a question about that. But – would she still choose to act upon that love if he wasn’t somehow pulling invisible marionette strings to keep her by his side?

Elena doesn’t want to find out. She is happy and doesn’t want him to tell her to go away. She knows she will continue to love him, but will act according to his wishes to leave his side. Damon knows he’s the bad guy, but he knows the only person he has ever wanted to do right by, who he has HAD to do right by, was Elena. And the story ended there. With Elena begging of him to think about whether they felt right together and Damon fighting every urge to do the right thing. 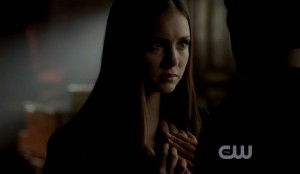 Why isn’t there a happy medium here? They do love each other. Surely there is some magical way to phrase what Damn needs to say to Elena that will allow her to choose to follow her heart, without forcing her to stand by his side. ‘Elena, you are in love with two men. It is up to you to follow your heart and choose where it takes you.  They choice is yours and yours alone. No man can tell you what choice to make, you may only listen to your heart. You are free from the bond I have provided you, but if your heart desires, you may return. Or you may choose another.’ Why wouldn’t that work? It sounds very hoodoo (whatever that means), but certainly doesn’t plant a seed requiring her to be any one place for any one reason. It requires no action on her part but to act according to her own wishes.

And so I have written. Let it be done.

What are the odds anything like that will happen next week? The promo didn’t even hint upon where that scene lead. What are your thoughts?