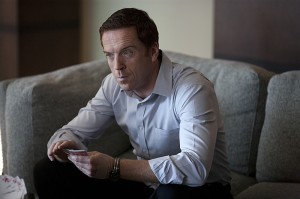 In the span of less than a year, Nicholas Brody went from being in captivity as a prisoner of war to being a promising Congressman with an eye on the White House. This season on Homeland, Brody’s battled with his allegiances and figuring out who he wants to be, but all of that intense soul searching got more complicated once he was all about declared the Vice President slot on the Walden Presidential ticket.

Which is why the ultimatum that Carrie offers him is difficult. In order to leave D.C. and fulfill their agreement from earlier in the season, Brody has to withdraw his name from contention for the Veep slot. He and Walden have grown closer in recent weeks and with the hype around the choice growing, it’ll look strange for him to suddenly drop out of the limelight. Brody will have to figure out a way to gracefully reject the possibility of becoming the Vice President without drawing any attention to himself if he wants to have the normal life he so desperately craves.

While Brody is trying to tear himself away from the D.C. political machine for the sake of his family, Dana and Finn are coming to an understanding about the unexpected turn their relationship took following the accident. Finn had been steadfast in not wanting to admit responsibility for the hit-and-run and hasn’t been there for Dana while she struggled with her feelings of guilt, but if there’s one thing the two need to provide proper closure, it’s a civil conversation where hatchets are buried and friendships is mended.

Elsewhere on Homeland, Saul meets with intelligence op Dar Adal (F. Murray Abraham) regarding the identity of Peter Quinn and leaves feeling doubt about the intentions of Estes, while Carrie ends up wandering away after a car accident.

Will Brody be able to opt out of the campaign, break off his ties with Walden, and get out of D.C. without anyone suspecting anything? Why do you think Peter Quinn was placed on the Brody mission by Estes? Where did Carrie go following the car accident and more importantly, is she safe?