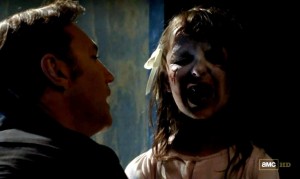 The Walking Dead had a very strange beginning. Was I the only one who thought the new survivors were crawling into the back of Woodbury on just the same day Rick and the team decided to take back Glenn and Maggie? I did wonder why there was no security at the area, and it looked abandoned except for the barbed wire. Maybe it was the back of the prison. It took a while to find out, that’s for sure.

Whoever the newbies are at the prison, they’ve earned my respect merely by calling Carl a man. In the situation they’re in, even an adult can tell when a child has taken on the responsibilities of an adult and is willing to recognize their territory and what they’ve accomplished. The Walking Dead shows the very best and the very worst of what we can expect of mankind. It was nice to see see some good in an unusually desolate reality. If there is any kid we’ve met so far who has acquired the regard of others, it’s Carl.

It was equally as easy for the our heroes to find their way into Woodbury, and Michonne into The Governor’s apartment. He doesn’t even have body guards? They really do have their heads up their arses with regard to the outside world thanks to ole Merle. It took virtually nothing for a Glenn and Maggie rescue. Kind of embarrassing given the way The Governor struts around town like he’s a savior. At least Andrea is finally asking questions…why would she be used to knock on doors when her skills would be better utilized taking on the attackers?

I honestly couldn’t believe the only person she saw in the melee was the one person she didn’t know. Really? She even missed Maggie screaming “RICK ” at the top of her lungs. 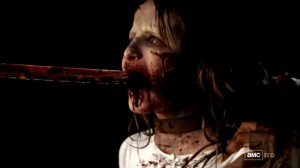 Michonne’s discovery in The Governor’s apartment was lovely. The disgust on her face at his pet fish didn’t even come close to what I expected, but his daughter’s tip toeing out of the cage was priceless. I don’t know what he has done, but the relationship he has maintained with her via the bag over her head is obviously the genesis of Milton’s experimentation on walkers. The irony of The Governor saying there was no need for his little girl suffering considering what he does to walkers and the living every day wasn’t lost on Michonne, and she was able to end at least the suffering of his daughter. 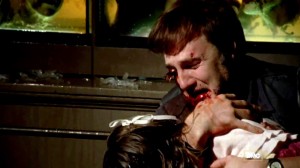 I was happy to see Andrea hadn’t slipped so far to the dark side that she would kill Michonne, but I did expect a reaction of decent proportions to her lover snuggling with his zombie daughter on the ground, surrounded by pickled (moving) heads with a giant shard of glass jutting out of his eye. Really, does that make me crazy? Strangely, she was barely affected by what she saw. Instead, she was concerned about The Governor. I wondered if she would feel the same way if she knew exactly who it was who had breached their little wonderland.

The look on Andrea’s face betrayed little more than shock when The Governor stood in front of his angry crowd of minions, declaring Merle to be a traitor and presenting to them one of attackers – none other than Merle’s brother, Daryl. “You wanted your brother, you got him.” Yes, the Governor is a sweet, sexy man. Exactly the type I want running my quaint little town. One who tells me he’s afraid and then throws two brothers who had been torn apart together in front of an angry mob screaming for their deaths. What a sick bastard.

And that, my friends, is that. We have had our mid-season finale. Nice cliffhanger. I won’t lie; I want Merle to give up his life to save Daryl. Do I think he will? No. But it would be a nice gesture of redemption for someone from whom you’d expect none.

The new folks at the prison were treating each other kindly before they arrived, and did right by Carl. Our hero’s numbers were dwindling by ridiculous proportions, so I’d be amazed if there isn’t a joining of the two groups to strengthen their numbers and start building a little Woodbury of their own. Of course, I’ve not read the comics, and there could be many of you tittering with laughter right now at my inane thoughts. I watch TV people, not read comics.

Until February when it returns, keep an eye right here on TVHackR for any news and updates about The Walking Dead.