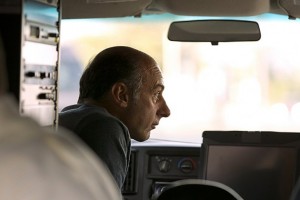 Last week on Homeland, Brody was forced into captivity once again as penance for his tirade against Roya. As Carrie looked on in horror, the former Marine was hurried into a waiting helicopter to be taken to places unknown; there was no indication where they were headed, what they were going to do, or if Brody would even see sunrise.

Tonight on Homeland, Brody is cornered by Abu Nazir and put into the same type of situation he was in eight years ago. Except this time, no one has any idea where he is and his interactions with Nazir are much more strained now than they were then. The CIA are frantically trying to pinpoint his location or find someone to give up the information needed to go in for Brody, while Mike is informing Jessica of a threat, which could mean that Nazir’s entrance into the country didn’t go unnoticed by key officials. Nazir will be walking a very difficult line, in that he has/had a close relationship with Brody and wants to use that in a gentle approach for information/compliance, but time’s running out. He knows that there are people that will be trying to find Brody, which may be the thing that escalates their talk and puts Brody at risk; Nazir will be much more likely to reach into his bag of tricks if he feels like his back is against the wall.

If he cuts it too close in hopes of getting Brody to comply, he could decide to kill his former confidante to keep him from being taken in by the CIA and turned. Little does he know, that already happened and anything that happens to Brody will put an even bigger target on his back.

Do you think that Brody will continue working with Nazir, even after being “de-programmed” by Carrie and teaming up with the CIA? Will the CIA be able to get him out of sequestration before something’s done to him, i.e. additional torture? Once Brody is let go, how will he react?