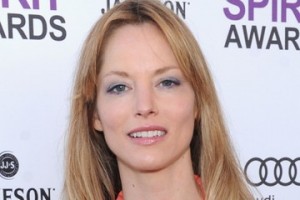 Sienna Guillory will be joining the third series of critically-acclaimed BBC mini-series Luther as a love interest for DCI John Luther. The actress is set to play Mary, a woman working in a vintage clothes shop who has a chance encounter with Luther that leads to her becoming entangled in his increasingly complicated (and dangerous) life.

When the third series picks up, Luther will be dealing with two conflicting crimes, in addition to being the target of a former policeman who wants nothing more than to destroy him. While meeting Mary may give him a chance to have a little happiness, not everything is as it seems, not in the world of Luther. There’s always a possibility that Mary is a part of the mad ex-copper’s plot to bring down Luther and that their first meeting/entire relationship has been orchestrated to lull Luther into a false sense of security. When Luther is on his game, he’s difficult to outsmart, but the time with Mary might take his eye off the ball and give all those that want to see him fall hope that he’ll be silenced once and for all.

Guillory, most known for roles in movies like Love Actually, Eragon, and Resident Evil: Retribution, has appeared on the likes of CSI, Criminal Minds, and Covert Affairs. Returning members of the Luther cast include Warren Brown, Dermot Crowley, Nikki Amuka-Bird, and Michael Smiley, with Lucian Masamati and Ned Dennehy set to guest  star.

The third series of Luther premieres in 2013. An exact premiere date has yet to be announced, though production on the four-episode series only recently began.

What do you think about John having a love interest, in addition to everything going on in his professional life? Will he be able to keep Mary safe in all the chaos? Is there a chance that the “random” initial meeting between the two wasn’t so random after all?