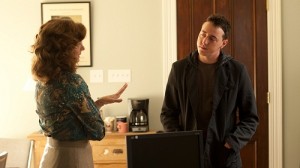 Toni Bernette has spent her career defending those who cannot defend themselves and taking on the corruption plaguing New Orleans, but aside from a few tense exchanges, a reputation that precedes her, and some name-calling, she’s managed to keep herself (and her family) out of the line of fire. NOPD may, by and large, hate her guts, but they’ve never taken it to a personal level of coming after her family or making their presence felt in any part of her personal life. Until she started digging around about Officer Wilson this season on Treme, that is.

On tonight’s episode of Treme, Toni is reeling from having to send her daughter to live with relatives and is backing away from the case as a result. She only has five (corroborated) complaints against Officer Wilson gathered and in the stopped up bureaucracy of New Orleans, that might not be enough to get him convicted. It’s one thing for the officers to talk about her behind her back or to avoid associating with her out in public, but for them to target her daughter takes the case to another level, one that, without hard evidence, Toni’s not comfortable being on. However, Bernard might have an eye witness to one of the shootings, which will be the perfect weapon to use against Wilson and something that will make each report that much strong. But can he find the witness before it’s too late?

Elsewhere on Treme, LaDonna learns who’s been threatening her, Janette finds herself a victim of her success, and Terry asks for a transfer from the department, which has grown increasingly hostile and distrustful of him.

Treme airs tonight at 10:00 on HBO. The show was renewed for a fourth and final season in September, which will consist of five episodes total. Production began earlier this month, though no premiere date has been hinted at yet.

Will whatever information Bernard has for Toni be enough to put Officer Wilson away? If anyone from NOPD gets wind of a potential witness that can put the gun in Wilson’s hand, is anyone in Toni’s life safe? How long will Sofia have to stay away from home?