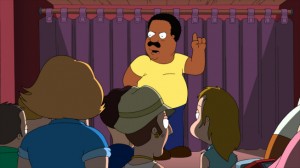 Tonight on The Cleveland Show, Thanksgiving has hit Stoolbend, but eating an extra helping of mashed potatoes and watching a football game are the last things on Cleveland’s mind.

That’s because during the episode, he ends up in a plane without a pilot and has to figure out a way to land. In order to make it home safely, he’ll have to put his trust in Holt and Holt’s drill sergeant father (guest star Will Arnett), who will be working to keep Cleveland calm and instruct him on how to land. Holt wasn’t able to spend the holiday with his family in a traditional sense, but going through an experience like this with his father might be better for their relationship, as they’ll have to lean on one another for once and see what the other is made of.

Speaking of Holt, due to spending the holiday alone, Cleveland asks him to babysit Rallo while the rest of the gang helps open an airport pub. Holt finds out, though, that it might not be such a bad arrangement, as Rallo proves to be quite the little chick magnet and provides him with plenty of material in which to use to pick up women. The holidays can be quite a lonely time if you don’t have a strong support system, but I have a feeling that Holt will be doing fine without being around the family this year. And since he’ll get to join forces with his father to help Cleveland, he might be able to get the family bonding without the drama, fighting, and tension that tends to come at the Thanksgiving dinner table.

Did you enjoy the first two episodes of this season of The Cleveland Show? How will Cleveland be able to land the plane and get the other passengers out of harm’s way? Will Holt’s time babysitting Rallo result in him getting lucky with a woman?