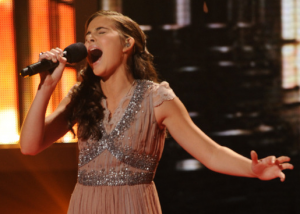 Last night on The X Factor, the contestants were tasked with singing the challenging songs of diva greats such as Donna Summers, Mariah Carey, and Celine Dion. While some of the contestants took the challenge and ran with it, others failed to step up to the challenge, leaving them at big risk for tonight’s elimination.

When it comes to the worst group of the night (and arguably the season), Demi Lovato’s young adults hold the title. CeCe Frey, who just can’t seem to get the message that America is not a fan, tried to wow everyone with Celine Dion’s “All By Myself,” but in the end, the only one blown away was CeCe herself, by the wind machine that was pointing at her during her performance. Poor Paige Thomas tried again to take Demi’s advice and fared a little better than last week, but still didn’t evoke any strong emotions from the crowd with her attempt at Donna Summers’ “Last Dance.” In fact, the only young adult who stood out last night was Jennel Garcia, who chose to forego Demi’s advice and return back to how she was during the audition process.  Not only did she go with a slightly sexy, but spunky song choice with Tina Turner’s “Proud Mary,” but she even brought back her fringed shirt look that she confidently shook around as she danced.  I hate to say it because I think Demi Lovato is a sweet girl, but is it possible that the same people who are styling her new Groucho Marx-esque eyebrows are the same people offering advice for the styles of these poor contestants in this group? Take a page from Jenell’s book, Demi and ditch the new stylists and go back to your audition look as well…it was way cuter.

The teens continued to look like heavy front runners last night with Diamond White determined to prove to everyone why she was brought back into the competition with her powerful rendition of Beyonce’s “Halo.” Perhaps the biggest standout of the entire night, however, was Carly Rose Sonenclar with a performance of Celine Dion’s “My Heart Will Go On” that left Simon asking her If she was even human. This girl has some serious singing chops and even if she doesn’t win the competition, which L.A. predicted she might, we will be seeing her for a long time to come. Beatrice Miller, on the other hand, is also a victim of her coaches inability to get a handle on what  would be best for her because, while she sang Cyndi Lauper’s “Time After Time” beautifully, it was so slowed down and boring that it was hard to even remember her youthfulness, much less her likability. Arin Ray, suffers from the opposite problem in which Britney has a bit too much confidence in him, assigning him Madonna’s “Crazy For You” to take on, which only proved that he just isn’t a standout at this point in the game.

Simon Cowell’s groups were two for three last night with Emblem 3 nailing a perfectly harmonized rendition of Alicia Keyes’ “No One” and girl group, Fifth Harmony, impressing the judges with Mariah Carey’s classic, “Hero.” The only group up in the air last night for Mr. Cowell was the wannabe hip-hoppers Lyric 145, who, while I get that the whole hip hop vibe and appreciate the mash-up of “ET” and “We Will Rock You” (I watch Glee, I know about mash-ups), just don’t seem to work for me because it really sounds like they are talking over each other the whole time instead of performing together. While Simon would disagree with my diagnosis, L.A. apparently would not; as he criticized the group and even warned that they may be at risk for elimination in tonight’s show.

With only two contestants left in the over 25 group, L.A. has to focus hard on the last two standing if he is to pull off a win this season. Lucky for him, his two remaining contestants, Tate Stevens and Vino Alan, were both ranked in the top 4 last week, with Tate being on top.  Last night, Tate took on Shania Twain’s “From This Moment” and managed to top his own performance from the week before. Vino, on the other hand, may not have been as good as the week before with a gritty rendition of Al Green’s “Let’s Stay Together,” but his performance was still amongst some of the best of the night.

Tonight, the contestants will learn their fates as we find out who will be staying and who will be going home.  If America stays consistent and votes for the best performances of the night, we should be seeing a bottom two filled with CeCe Frey and Arin Ray, to which I think the judges will send CeCe home, but with a fickle viewing audience anything could happen.  Guess we’ll just have to wait and see.