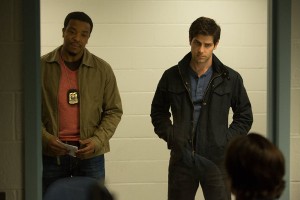 With two episodes of Grimm to go this fall, Adalind pops back up and reveals that her role in what’s going on in Portland might be bigger than Nick expected. We know that it was her cat that caused Juliette’s coma and, indirectly, her attraction to Renard, but the promo hints that her involvement is (and will become) much deeper than has been revealed. Might she turn her attention to Juliette and attempt to get her to break up with Nick? Or will she go the more direct way and find someone to attack the Grimm in a bid to make him pay for the death of her mother and the loss of her powers?

Elsewhere on Grimm, Hank’s newfound knowledge of the Wesen world continues coloring how he views the cases he’s handling. This time, he gets suspicious about a man currently on death row that he arrested; the man claimed self-defense during his murder trial and that he had defended himself against “monsters.” Hank has revisited cases before, but this one is different and he has a chance to save a life if he can figure out a way to get the man off of death row without delving into the monster talk that didn’t fly in court. Part of the reason that Hank’s managed to keep it together after being able to see Wesen is that Nick could see them, too, and I’m sure that there’s a certain amount of comfort knowing that the two of them aren’t alone, though the time for grilling the man about his ability isn’t now.

Not when his life depends on how quickly Hank and Nick can come up with a way to get his conviction reversed.

Grimm airs tonight at 9:00 on NBC. The show’s fall finale will be airing next week.

Just how much control has Adalind had over the current situation on Grimm? What will Nick’s reaction be to the revelation that Juliette feels something for Renard? Can Hank get the conviction of the man on death row overturned now that he knows about the Wesen world?