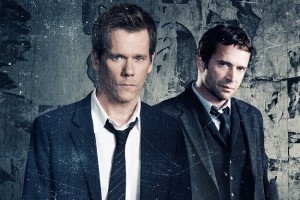 I took a class in college about the sociology of serial killers – who they are, where they came from, what traits do they have in common – that kind of thing. I had always been interested in serial killer entertainment; I love Silence of the Lambs, I was an avid Dexter fan, and I’ve read books on the subject, so the class was an ideal way to learn and focus on something that I found intriguing for a semester.

The Following looks like it’ll be my class on steroids, as the upcoming FOX drama finds one serial killer trying to spread his message through the internet. Ex-FBI agent Ryan Hardy (Kevin Bacon) has been pulled out of a comfortable retirement in order to catch Joe Carroll (James Purefoy), a criminal mastermind that has moved behind bars to behind a computer screen; Carroll has developed a cult-like web of killers that respond to his every move and can carry out his dirty work for him. He won’t have to get his hands dirty and with the rate that information spreads over the internet, it might not take long for his local army of devotees to expand to a world of people ready, willing, and able to do his bidding.

The series premiere of The Following airs Monday, January 21st at 9:00 on FOX. There will only be 15 episodes in the first season, however, as the show had to accommodate Bacon’s busy film career.

Will you be watching The Following when it premieres? Do you think that network television can sustain a premise like this without sacrificing anything in the way of content or mood? Are you excited to see Kevin Bacon tackle a regular series role, even if it’s only 15 episodes?