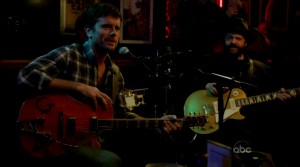 Well, if we wondered why Peggy and Teddy were making eyes at each other, we got confirmation of embezzlement this week. Right in the middle of an audit is not the best time to be trying to get your ducks in a row. It’s the time for rash decisions to be made that lead to mistakes that can bring down empires. While that may sound like crazy talk, when you’re talking about the family of Rayna James, you’re talking about empires. The political sector remains my least favorite part of Nashville, and if Rayna divorced Teddy and disowned Lamar and her sister, I’d not be the least bit sorry to see them go.

Juliette would have needed to get a new house with a lot more privacy if she was going to be forced to keep her mother in her life to keep her quiet. Jolene even had the nerve to scream, while in her underwear on the front yard, that stealing nail polish was embarrassing. Maybe she runs through neighborhoods in her undies all the time, but of the two, I’d rather snag a bottle of nail polish with a good excuse.  Deacon was amazing with Jolene. Using his history of addition was just what Juliette needed, even if it made her uncomfortable to let him into the ugly side of her life.

Deacon introducing Juliette to friendship seems honorable, but also a bit too late, considering the number of times they’ve been together already. It’s a little difficult to pull back on the reins and change your expectations when you’ve already been down that road. It’s not surprising that she thinks kissing him is the appropriate response to his help with Jolene. He wasn’t clear about his intentions in the first place, and he may not even be sure what his desires are at this particular moment in time. Considering he counted seven pills in a bottle all night long, his addiction still bubbles closely to the surface of what he is doing at any given time. That’s why it’s so important for him to make the right decisions, and not just any decision, because the wrong one could send him into a downward spiral.

Avery trying to slide onto Scarlett’s gravy train by offering to play guitar at her session was another awkward situation. I actually cringed when he wrote his own guitar riff to accompany the song written by Gunnar and Scarlett. Scarlett has such a wonderful pedigree and so many people to fall back on that I can’t understand why she won’t see through Avery’s crap. I’m worried he’s going to slide into  abuse, even though he hasn’t shown signs of it to this point. Even when they lost the recording deal because of Avery’s shenanigans, Scarlett still chose him. Girls who choose bad boys always end up with the short end of the stick. 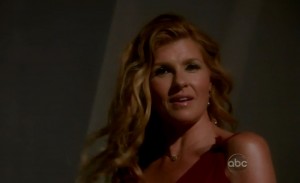 The more music per episode, the better. I enjoyed Deacon and Juliette playing together, as I always do, surprisingly. I was so sure I would dislike Juliette from the start, but she has won me over. Rayna looked hot filming the contested commercial and Deacon kicked it at the Bluebird Cafe singing Sideshow. Admittedly, I’ve been buying all of the episode packs that come available and I’m totally addicted to them. I am not a country music fan. Does that mean Nashville is an obsession? It very well may be.

The shocker of the night was Deacon getting in a fight to protect his history with Rayna at the Bluebird. When he called her for help, she hung up, but Juliette came through. After all that’s what friends are for, right? After his altercation he realized holding onto the past was damaging, and he let the rights to the song he shared with Rayna for the commercial go. By taking his time, he had spurred Rayna into action, and she started writing on her own. She already recorded what she considered her first single of her next album, the one she wanted to be fresh and new, before Deacon made his choice. I’ll be honest, I think her own song suffers from the loss of her writing partner, but it will make for a good dramatic story as her label has to decide if the new, improved Rayna James is still the person they want to support.