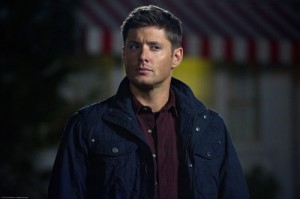 While it was nice to see Garth again and fondly remember Bobby Singer “Southern Comfort” didn’t pack the punch I was hoping for from Supernatural this week. Sam and Dean have become professional cancers in the personal issue ballet. They come as close as they can to talking about something and then pirouette in the other direction when things get real. It’s as if neither Winchester wants to show their hands and their distrust of each other wearing thin.

So thin, in fact, I’d not mind exploring a few episode on the air where they brothers decide to live apart. Let’s see what their lives are like without each other. We’ve touched on that briefly in the past when Sam let Dean have his life outside of hunting. Let’s keep in mind how Dean has conveniently forgotten that entire chapter of their lives because he attempted to look for a Sam for a while before giving up and settling into that life. Anyway, it just doesn’t matter.

Sam is still pining for Amelia. When they flashed back to him greeting her at her door at the end of “Southern Comfort,” a part of me quickly thought he had hit the road. I should have known better. The boys are very good martyrs. It’s going to take one hell of a push for one or the other to make the first move.

I was shocked when Dean was under the influence of the penny and he said Benny was more of a brother to him than Sam had ever been. Not was now or at a particular time, but had ever been. Those words hurt, and in return Sam made sure Dean knew he might be the hunter who ran into Dean’s beloved “Blood Brother” Benny and iced him on day soon. It’s as if they’re just trying to hurt each other to see who will crack first. When even the lovable Garth can’t get them to crack a smile, you know things are fairly dire.

Let’s see a few episodes of Sam heading back to Amelia, reading the papers and keeping up on Dean hunting with Garth. Maybe even his blood brother Benny will give it a try. He’s sad enough that it might take his mind off of his plight and his uncertain future in this new world he’s come back to after so many years. It could also cause Sam to miss his brother. Whatever it is, we need something drastic to light a fire under their asses and remember, as Garth pointed out, how very lucky they are to have each other.