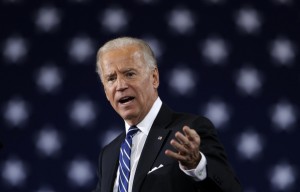 Leslie Knope may have had a rough go at it during her first days in her new position, but it looks like she’ll be getting a major positive boost in the form of a certain politico.

According to Entertainment Weekly, Vice President Joe Biden will be appearing on an upcoming episode of Parks and Recreation. On November 15th, the second most powerful man in the country is set to cameo on the NBC political comedy, as Ben introduces Leslie to one of her political idols (and the entirety of her celebrity sex list). She had been losing a little bit of the vim and vigor she had for the political process now that she’s helping to enact the laws (and facing lobbyists, stubborn opponents, approval ratings, etc.), so being able to be in the same room with and talk to someone of Biden’s stature (both nationally and in her mind) could help her disposition improve rather quickly.

Biden will be joining multiple national politicians that have guest starred on Parks and Recreation this season, as the show has been dividing its time between Washington D.C. and Pawnee. Senators Olympia Snowe and Barbara Boxer made an appearance earlier in the season, but Leslie didn’t get a chance to enjoy meeting two of her biggest political influences (or make a good impression on them, for that matter). With her relationship with Ben having moved to the next level in the last episode and her comfort in the role of city councilor growing by the day, Leslie might be in the right place to appreciate meeting the Vice President and reflect on just how far she’s come.

Parks and Recreation airs tonight at 9:30 on NBC. The show will be moving to 8:30 on Thursdays come mid-season.

Have you been enjoying the current season of Parks and Recreation? How do you think that Vice President Biden will do in his episode? What kind of reaction will Leslie have to coming face-to-face with her celebrity sex list?