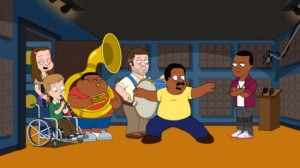 Tonight on The Cleveland Show, Cleveland will be faced with an opportunity to get revenge on former collaborator Kenny West. After the rapper, who has rocketed to superstardom since his last appearance, cheats Cleveland out of royalties from “Be-Cleve In Yourself”, it’s discovered that he’s involved in the Hip-Hop Illuminati. Several members looking to get Kenny out of the secret society come to Stoolbend, nearly begging Cleveland to kill Kenny’s career due to an inflated ego and a lack of focus on their primary objective.

Rather than go along with the rest of the Illuminati in raising gas prices or spreading their message through their music, Kenny’s more concerned with ostrich riding, parmesan hats, and giant remotes; however, since he’s the biggest star out of the entire society, they can’t exactly overthrow him themselves. By initiating Cleveland and getting him into the innermost depths of their organization, the four other stars want a close proximity to Kenny to lead to Cleveland doing their dirty work for them. Cleveland knew Kenny when he was a regular guy rapping in the mall, so it’ll take a lot for him to pull the trigger on ruining a career he knows took hard work to build up.

Elsewhere on The Cleveland Show, Cleveland Jr. starts a polka band after being rejected from the marching band at school. While his father is going behind the curtain of the music industry and palling around with the who’s who of the urban music scene, Cleveland Jr. is getting firsthand experience on stage and in front of audiences. However small (or imaginary) they may be, of course. Will he have the talent (and connections to musicians adept at polka) to make the band anything but a disaster?

Do you think that Cleveland will join the Illuminati and help take Kenny down? Which of the guest stars (Kanye West, will.i.am, ?uestLove, Bruno Mars and Nicki Minaj) are you most looking forward to seeing on the show? Will Cleveland Jr.’s polka band be a good thing for him?