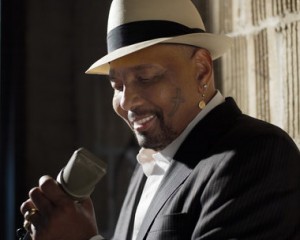 Down in the Treme, it’s me and my baby – and Aaron Neville.

According to The Hollywood Reporter, the R&B legend (and one half of the iconic Neville Brothers) will be appearing on tonight’s episode of the HBO drama. Neville will, of course, be playing himself, as the Brothers are performing at a D.C. Mardi Gras Ball. Playing at the same event is Annie, with Nelson also in attendance, likely trying to schmooze his way into a more prolific, higher paying job than the one he has now.

The Ball is another step in the right direction for Annie, who has truly come into her own this season. Once too shy to play in front of many other people or to sing in front of anybody, Annie now has a manager, a record deal, and a career that has been growing in both scope and hype over the course of the season. With her venturing outside of her comfort zone and playing away from the southwest, it’s only a matter of time before she gets out of NOLA for good and sets up camp in another major city. But with new found career opportunities come tough choices and Annie will have to decide if New Orleans (and Davis) are enough for her anymore.

Neville’s acting experience is rather limited, having only appeared in a handful of movies in the early-to-mid 90’s. (His last role came as “Angry Neighbor” in the 2001 TV movie Boycott, which starred Jeffrey Wright and CCH Pounder.) However, he’ll will be joining a tremendous list of musician cameos this season on Treme, including Fats Domino, “Frogman” Henry, and Kidd Jordan.

Treme airs tonight at 10:00 on HBO. The David Simon/Eric Overmeyer creation was recently renewed for a fourth and final season of five episodes, the production of which will begin on Monday.

Are you looking forward to seeing the Neville Brothers pop up on Treme? What other musicians, NOLA-based or otherwise, would you like to cameo on the upcoming final season? Will the event the Brothers play be the boost that Annie’s career needs to go to the next level?