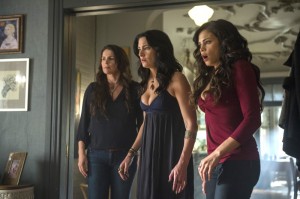 Joanna’s power was able to protect the Beauchamps from the coming Asgardian forces for over a century. Despite the curse that the king inflicted them with, she did her best to keep her family safe and give her girls as many days as they could get in each respective life they lived. She knew that eventually they would die and be reborn, making the method not as important, but Joanna didn’t want any of those deaths to be at the behest of her father’s troops, nor did she want an attack cutting short any of the lives her daughters did have. But does she have enough power to bring the girls back now that they’ve faced death once again?

On the next episode of Witches of East End, Joanna resorts to drastic measures in order to bring Freya and Ingrid back after they met their end at Tarkoff’s hands. Her power is unmatched by anyone in Asgard, with her reputation for being ruthless with her gift preceding her, but Joanna has never had something this important cross her path before. After her daughters have made it this long, with Freya entering into her 30s for the first time since the curse was enacted, she doesn’t want them to have that happiness, sense of accomplishment, and self-knowledge unfairly stripped away, so now more than ever, she needs to tap into her power and find some way, any way, to keep her daughters from being reborn yet again. If Joanna does manage to bring Freya and Ingrid back, there’s the possibility that the curse could be lifted, seeing as how they were resurrected vs. reborn, but what will she have to do in order for that to be a possibility?

Elsewhere on Witches of East End, Joanna and Wendy reconnect with their father through Tommy, while Dash deals with the reemergence of Kyle’s body and the possibility that he could be tied to the murder.

Do you think that Joanna will find a spell to bring Ingrid and Freya back to life? Will she be forced into making a deal with her father in order to get her girls back? Is Dash going to be able to keep himself from being tied to Kyle’s murder?