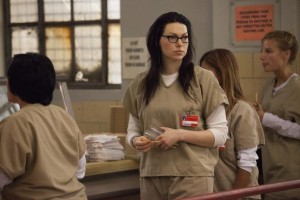 Orange Is the New Black has been renewed for a third season by Netflix, per star Laura Prepon’s Instagram that was later confirmed by the streaming service. Netflix has been trigger happy with early renewals, giving Orange a second season pickup before its first season premiered, but this time around, the renewal is less headline grabbing and more about giving a vote of confidence to a valuable show. Reportedly, Orange is the New Black is the most watched original Netflix production, with the dramedy managing to snag some serious acclaim – nominations at the Golden Globes, Grammys, and Writer’s Guild of America Awards; placement on AFI’s Top 10 of 2013 list; wins at the Satellite Awards, GLAAD Media Awards, and Peabody Awards.

The third season of Orange Is the New Black will be released sometime in 2015 on Netflix. You can check out the trailer for the second season below.