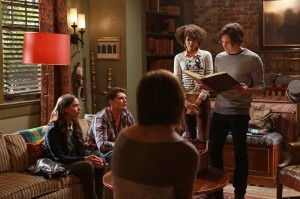 Caleb’s in a bit of a precarious position when it comes to his time in Ravenswood. Despite being surrounded by four people who know what he’s going through and whose help he needs if he wants to break the curse that threatens their lives, he’s never felt more alone and yet he would do anything to keep his loved ones from Rosewood from coming to town. Even if they arrive with the best of intentions, Caleb doesn’t want them anywhere near the curse’s path and can’t exactly explain the reason why he’s so beholden to staying in town following Miranda’s death, but that’s not going to stop those back home from worrying about what he’s doing and why he hasn’t come back to Rosewood for good.

Listed below are the dates, times, and titles of the next two episodes of Ravenswood.

Tuesday, January 7th – “Revival”
Fresh off his trip to Rosewood, Caleb struggles to deal with the aftermath of his brief time with Miranda on the other side. Remy realizes her dreams may be the best clue they have into understanding the pact, but she unwittingly attracts something that is determined to make sure Remy doesn’t wake up. And Miranda decides to haunt Mrs. Grunwald for answers but discovers Grunwald may have a ghostly friend of her own. Meanwhile, Luke and Olivia are unnerved by Collins’ increasing attention towards their mother, and Olivia makes a major decision about Dillon, without realizing his true motivations.

Tuesday, January 14th – “Home is Where the Heart is – Seriously Check the Floorboards”
The Ravenswood Police descend on Luke and Olivia’s house after something with ties to events in both the past and present is unearthed. Caleb’s father decides to find out what his son is up to in Ravenswood, and Caleb is unsure if he wants his help, or if he wants him to get out of town. Remy continues to deal with lingering effects of what she witnessed in her dreams. Meanwhile, Olivia tries to keep it together in the wake of recent happenings, and Miranda gains surprising insight into Grunwald and her connection to the supernatural.

Ravenswood returns Tuesday, January 7th at 9:00 on ABC Family. You can check out a preview of the winter premiere here.