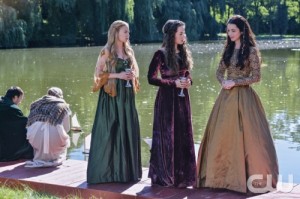 Even with her improving relationship with Francis, the only people who Mary knows she can fully trust are her ladies-in-waiting. There may come a day when Francis is the most important person in her life, especially if she wins him over and convinces him to marry her, but for now, Kenna, Aylee, Greer, and Lola are the only things keeping Mary sign amidst the madness she’s been forced to endure. Without knowing that they had her back, she might have lost hope that things were going to turn out well in France long ago, so now more than ever, she needs them in her life. But what would happen if Mary were to overstep her bounds and accidentally turn one of her friends against her?

On tonight’s episode of Reign, Mary confronts Kenna about her affair with King Henry, driving her friend away with the (perceived) judgment of the arrangement. Though Mary wants all of her ladies to be happy and find their own places at court away from their servitude, Kenna’s in a dangerous position, potentially putting herself right in the middle of Catherine’s cross-hairs. But she doesn’t want to hear about what could happen if the queen were to figure out what’s going on – she wants Mary to be happy for her and support her in this endeavor, but Mary doesn’t support it, not when it could lead to Kenna’s downfall. With Kenna claiming that she’s no longer under Mary’s rule now that she’s been named Henry’s mistress, will her friendship with the future Queen of France ever be the same?

Elsewhere on Reign, Francis’ ex-girlfriend Olivia arrives at the castle and brings the dangers of the woods with her, while Aylee is forced to spy on Mary at the behest of Queen Catherine.

Reign airs tonight at 9:00 on The CW. You can check out a preview of the episode here.

Should Mary have ordered Kenna to halt her affair with Henry? What impact will Olivia have on life at the castle once she’s arrives? Will Aylee be able to free herself from the bonds of blackmail?