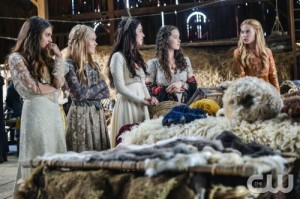 Though Mary’s relationship with Francis isn’t where she wants it to be, the two grew closer once he saw how strong of a queen she is destined to become and it was revealed that Tomas was responsible for the ambush that nearly killed Bash. For the moment, however, they’re taking things slowly and attempting to organically build a relationship before getting married; it’s a good time to focus on said relationship, with each of them gaining confidence that there could be advantages to the marriage aside from military power plays, and with the latest threat to their union vanquished, they might have the time to put in the work necessary to strengthen their connection. But as Mary’s suitor was revealed to be a man desperate for the throne of his own country, one of Francis’ exes pops up soon after, putting Mary in an awkward position.

On the next episode of Reign, Francis’ ex Olivia arrives at the castle, bringing the dangers from the woods with her. Soon after finding out that Francis was the one dumped, Mary turns to Bash for comfort regarding the possibility of her betrothed straying from her, potentially taking Olivia on as a mistress. While Bash may have his own motivations for getting close with Mary, he does seem to genuinely care about her well-being and therefore isn’t the worst person to turn to, considering that her ladies won’t have any understanding as to Francis’ former relationship with Olivia or what he may be thinking by getting closer to her again. But Bash isn’t the only one with ulterior motives here, since the heretics in the woods have set their sights on the castle and may be using Olivia to gain the type of access necessary for an assassination and a blood sacrifice. Can Mary figure out what Olivia is after and send her away from the castle before it’s too late?

Elsewhere on Reign, Bash is threatened by the heretics for disrupting a blood ritual, while Aylee is blackmailed by Catherine into spying on Mary.

Does Olivia have ulterior motives in returning to the castle? Is Bash in any danger due to interrupting the ritual in the woods? What does Catherine