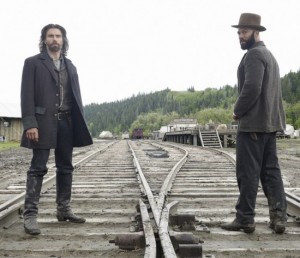 AMC has announced that western Hell on Wheels has been renewed for a fourth season, set to feature 13 episodes and premiere sometime next summer. Showrunner John Wirth, whose hiring before the season came after an exhaustive search that almost rescinded the show’s renewal, will be returning, as well.

“John Wirth and his team on both sides of the camera delivered a remarkable third season and Hell On Wheels fans responded. We are so proud of this show and congratulate everyone who has contributed to its success,” said Charlie Collier, AMC president. “AMC has served passionate Western fans for three decades, so it is particularly gratifying to see these viewers capping off their Saturdays with an original Western on what has historically been a tough night of the week for television. Our commitment to the genre is unwavering and we look forward to continuing to super-serve this audience with an expanded fourth season of Hell on Wheels.”

Hell on Wheels becomes something of a cable anomaly with its renewal, as Saturdays have become the no man’s land of the television industry, not exactly conducive to survival of original scripted series. However, by concentrating its recently acquired library of western movies on the night, AMC was able to grow the show’s audience during season three, where it drew an average of 3.3 million viewers, live and with three days of time shifting. While this doesn’t mean that cable networks are going to suddenly discover the value of Saturday programming, considering that Hell on Wheels thriving is a special case, the fact that the show was able to make it on a traditionally lower-viewed night means that your favorite middling Sunday performer might not be as dead as you think it is.

What did you think of this past season of Hell on Wheels? Was the de-emphasis on Bohannon’s revenge arc for the better of the show? Where would you like the show to go during season four?