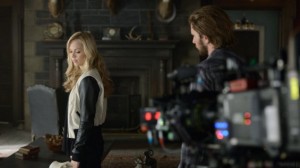 The first trailer for upcoming Canadian werewolf drama Bitten, which was recently acquired by Syfy, has been released and in it, we get our first look at Elena Michaels (Laura Vandervoort), the lone female werewolf in existence. Rather than adapt to her new way of life, she tries to get as far away from it, and everyone associated with it, as possible by abandoning her pack and moving to a new city. Once there, she does her best to hang on to the normalcy that was stolen away from her, working as a photographer and getting a new boyfriend who knows nothing about who she really is. However, once bodies start piling up back in her hometown, she’s forced to accept that idea that she’ll always defend her pack, no matter the circumstances.

In addition to Vandervoort, Bitten stars Greyston Holt (Fakers) as Elena’s werewolf ex-boyfriend Clayton Danvers, the man who turned her into a wolf; Greg Byrk (A History of Violence) as pack Alpha Jeremy Danvers; and Paul Greene (Somewhere) as Elena’s current boyfriend Phillip Adams. The show also features the likes of Steve Lund (Haven), and Michael Xavier (In Return).

Bitten is set to premiere sometime in 2014 on Syfy. It’ll be one of at least two new international acquisitions for the network next year, as Syfy will also be airing New Zealand-based action-dramedy The Almighty Johnsons. The two join Lost Girl and Continuum as the network’s current international programming, with Merlin having just ended this past May and both Sinbad and Primeval: New World spending a brief amount of time on Syfy this summer.

Will you be watching Bitten when it premieres on Syfy? Do you think that the actual footage is better or worse than the series description sounded? Is Bitten likely to fit in well with the rest of Syfy’s scripted dramas?