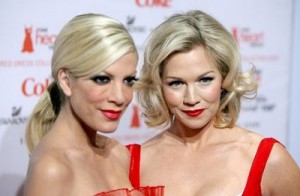 According to TVLine there could be a 90210 reunion on ABC Family’s comedy pilot Mystery Girls.

Says the site, Jennie Garth is currently in talks to join Tori Spelling in the pilot, which was greenlit by the network in August.

Mystery Girls follows a former starlet (Spelling) who’s life turns to crime-solving with a former co-star after a witness to a crime refuses to talk to anyone but the “Mystery Girls.”

Garth and Spelling were last seen onscreen together six years ago during The CW’s 90210 reboot, reprising their roles as Kelly and Donna.

What do you think?