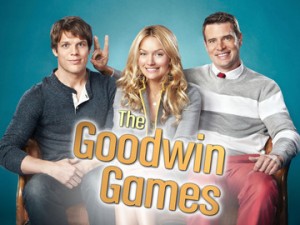 The Goodwin Games star Scott Foley tweeted the premiere date for the troubled FOX comedy yesterday. Beginning Monday, May 20th at 8:30, the show will finally see the light of day after going through quite a bit of problems since it received a series order last May. Initially held for a TBD date in mid-season, it saw one of the leads recast, the episode order cut nearly in half, and the network distance itself from the idea of airing the show in-season once creators Carter Bay and Craig Thomas had their other show (How I Met Your Mother) renewed for a final season.

Starring Foley, Becki Newton, and T.J. Miller, The Goodwin Games revolves around three estranged siblings: overachieving surgeon Henry (Foley), former math prodigy turned party girl Chloe (Newton), and ex-con Jimmy (Miller). After their father Benjamin dies, they’re all thrust back into each other’s lives for the first time in quite a while for the reading of the will. Rather than a straightforward document allocating his considerable assets, Benjamin created an elaborate game of Trivial Pursuit with questions about their childhood; if they complete the game, they inherit $23 million. However, there’s another player in the game that they didn’t know about, meaning that the Goodwins may have to band together to revisit their former selves and win the final game their father wanted them to play.

Also starring Kat Foster and Melissa Tang, the show will feature appearances from the likes of Laurie Metcalf, Adam Rodriguez, Kaitlyn Maher, Jerrod Carmichael, Stefanie Black, and Beau Bridges. You can check out the initial pilot preview below.

The Goodwin Games is the latest 2012-13 scripted programming to get a premiere date, as ABC’s Mistresses had its Monday, May 27th premiere announced yesterday. The only currently unscheduled show is NBC’s comedy Save Me; Crossbones and Dracula are likely to be carried over into next season.

Will you be watching The Goodwin Games? Why do you think FOX held it for so long? Would you like to see the networks make a concentrated effort to add scripted programming in the summer?