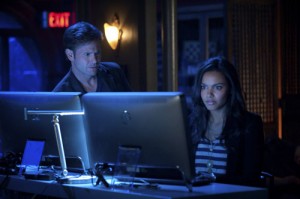 The CW has announced that it will be moving Cult from Tuesdays at 9:00 following Hart of Dixie to Fridays at 9:00 following Nikita beginning March 8th, the same night that Grimm returns to NBC. Repeats of other CW dramas will fill the Tuesday slot that Cult leaves behind, beginning with Beauty and the Beast on March 5th, the final new episode of Hart of Dixie before a month-long hiatus.

Although uprooting a new show this early could be cause for concern, the move makes a lot of sense. Cult hasn’t gotten enough sampling for the move to be truly damaging and it meshes better with the similarly dark Nikita than it does with Hart of Dixie, the closest thing The CW has to a comedy. Genre fare has managed to carve out a decent niche on Friday nights, particularly on The CW with Smallville and Supernatural thriving on the night, and Cult could take advantage of that to potentially thrive or even grow. With Nikita getting a little stronger after moving to 8:00, it’s not a stretch to think that Cult could do okay business at 9:00 and even if it doesn’t, all 13 episodes will be airing.

A potential upside to the move is that the network will be able to see how different shows perform with Hart of Dixie and away from their original nights. The CW needs as many data points as they can to parse out renewals for their bubble shows and if something like, for example, Beauty and the Beast can show that it can make it on a night without The Vampire Diaries, it could greatly help its case for renewal. The Tuesday at 9:00 slot has been a tough go for the network for years and now is a good time for them to see which of their shows have a loyal live audience and if any of their current crop could survive there. If not, look for one of the more hyped pilots to be slotted there and doused with promotion come fall.

Will you be following Cult to Friday nights? Do you think that it’ll do better following Nikita and, potentially, have a chance at getting a renewal? Should the network have premiered it there to begin with?