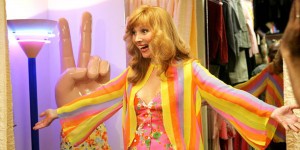 HBO has announced that comedies Getting On and The Comeback will premiere this November with six-episode orders each. It’s no surprise that the two will be premiering in late fall, considering that the former made its debut last November and that Boardwalk Empire and The Newsroom will be completed by November, though a concrete premiere date will be released later this year.

Getting On, from creators Mark V. Olsen and Will Scheffer (Big Love), follows the goings on at Billy Barnes Extended Care Unit, a wing in a Long Beach hospital dedicated to taking care of older patients. Starring Laurie Metcalf (Roseanne), Alex Borstein (Family Guy), and Niecy Nash (The Soul Man), season two of the series will find Jenna on a research binge, Didi desperate for a raise, and Dawn continuing to try and land Patsy, though the latter is more concerned with his new lean, green program for the wing.

Created by Michael Patrick King (Sex and the City) and Lisa Kudrow (Friends), The Comeback debuted in 2005 to critical acclaim and low ratings, the latter of which caused its cancellation after just one season. The story of former it girl Valerie Cherish (Kudrow) attempting to recapture the fame that has eluded her for years, The Comeback was brought back due to strong HBO Go numbers and the show’s reputation as a daring, inventive comedy that predated the unstructured reality craze. Season two finds Valerie thinking that she has it all figured out when, in actuality, she’s just as lost as ever.

Will you be watching the second season of Getting On? Do you think The Comeback can recapture the magic of its first season? What kind of year do you think HBO is having creatively?