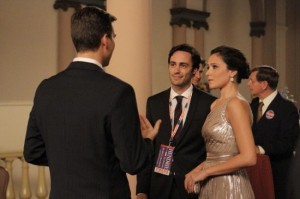 April is someone who’s lived their life conservatively, never stepping out of bounds and always keeping her mind on the future. If something wasn’t helping her to get where she wanted to go, she couldn’t have it in her life, so rather than having the typical bumps and bruises that comes with transitioning to adulthood, April’s move from college to the working world has been fairly smooth, all things considered. But she’s had to keep quite a bit in with the death of her father and her recent diagnosis, so much so that she needs a moment to let go and to do things that she normally wouldn’t. Could Leo be the one to force her out of her comfort zone and give her a break from always having to be the strong one?

Tuesday, July 8th – “The Family That Lies Together”
Dominic takes April to see a psychic for fun, but the results disturb both of them, leading Dominic to come clean to April about a family secret. When her own family secrets become too much for her to bear alone, April enlists Dominic’s help in learning more about her “sister,” Natalie. Meanwhile, April receives an official diagnosis from George and Sara’s mounting concern for April’s health leads to a confrontation.

Tuesday, July 15th – “Clear Lives, Full Minds, Can’t Eat!”
April gets a surprising invite to shadow Bruce Hendrie at his campaign ad shoot for the paper. While there, Leo senses her apprehension of her diagnosis and challenges April to take control of her future. Not one to back down from a challenge, April accepts and gets a taste of Leo’s reckless and carefree life. But when things go too far, she learns the severity of Leo’s illness. Meanwhile, Brenna is unsure of her future with Kiernan, even more so when the relationship causes tension with her new friend Greer.

Should Leo be pushing April as hard as he has been? Will Brenna choose to see where things go with Kiernan, even if it threatens her friendship with Greer? Could the confrontation between Sara and April lead to a revelation about the latter’s health?