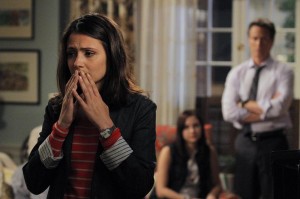 April made a brave step when she confessed to Brenna that she had been diagnosed with cancer. Granted, that was less voluntary and more about the heat of the moment, but she still learned what it felt like to tell a family member that she was dying. While it helped that Brenna is the member of her inner circle that she’s least worried about going forward, she still has people in her life that she’s terrified of letting into her new reality for fear of inconveniencing them or driving them away.

On the next episode of Chasing Life, April struggles to be honest with Dominic about her diagnosis, even after inadvertently coming clean to Brenna. It’s one thing for your family member or life-long best friend to know about something as sensitive as a cancer diagnosis; it’s a whole other animal for a potential love interest, especially someone with whom you’ve only been acquainted a short time, to see you that vulnerable, especially if you’re someone like April who detests feeling weak. But it’s something that April is going to have to confront sooner rather than later, that idea of letting Dominic see her completely as she is and not as she wishes she were. He’s going to learn that she has cancer sometime in the near future and rather than focusing her energy on keeping her secret, perhaps April should be figuring out how to tell him and what it would mean for them going forward.

Elsewhere on Chasing Life, Sara’s worries about April’s recent sluggishness lead to a confrontation, while Dominic reveals a family secret to April and the search into Natalie Ortiz’s identity continues.

When do you think April will tell Dominic about her condition? Will the fight with her mother force April’s hand? What type of family secret will Dominic tell April?