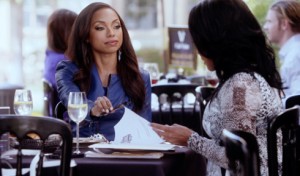 Jelena Howard prides herself on being self-sufficient, on not needing to lean on anyone for financial or emotional support.  It may be a lonely existence, keeping everyone who cares for you at arm’s length, but it’s one that allows her to avoid being hurt and to have as much control over her life as possible. While there might be cracks starting to show in her icy veneer after the breakup with Terrence, Jelena is holding tight to the only way she knows how to live for fear of being pushed into a world that makes her uncomfortable. But what happens when she’s forced to confront a figment of her past?

On tonight’s episode of Hit the Floor, Jelena reunites with her mother after two years apart, though the reason is less about the Devil Girl captain discovering that she is, indeed, human and more about who Olivia left her 10% stake in the squad. It might not be surprising that Olivia found a way to get one over on Jelena from beyond the grave, but it’s a situation that Jelena has to resolve in order to seize control of the squad. If she’s going to get rid of Sloane and Ahsha, she’s got to have that 20% (the other 10% from her deal with Oscar), so for the chance to rule over the Devil Girls and dispatch those who trespass against her, Jelena is going to have suck it up and convince her mother to sell her share.

Elsewhere on Hit the Floor, Ahsha deals with the realities of being Derek Roman’s girlfriend, while Sloane finds herself a new ally and Kyle received an unexpected visit from someone from her past.

Why do you think Olivia left her stake in the Devil Girls to Jelena’s mother? Will Ahsha be able to handle the bad that comes along with being the girlfriend of a superstar? If Benny turns out to be Kyle’s visitor, is there a chance the two get back together?