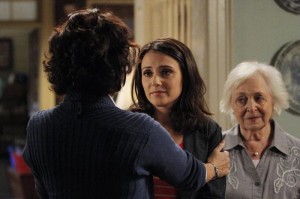 One of the primary stressors in April’s life right now is her relationship with Dominic, but it’s not in the way you would think. Things with him are so promising and so comfortable for her that she’s psyched herself out, worrying about getting too close to him and when to reveal that she was diagnosed with cancer. Dominic represents the life that April could’ve had and while she wants to cling to him for dear life, she knows that eventually, she’s going to have to be honest with him about her diagnosis and that there’s a real possibility that he could leave her. Not that she would blame him, since they’re only getting to know one another and a cancer diagnosis is a lot for anyone to handle, but she wants the good part of their relationship to last as long as possible before she has to break her own heart.

On the next episode of Chasing Life, April learns from a co-worker that Dominic has a bit of a reputation for being a playboy, which might be a blessing in disguise. April had been torturing herself about whether and when she should be honest with this man, but if she’s not beholden to him and if something gets in the way of their connection, she won’t have the guilt of being the one responsible for their relationship’s downfall. That’s one less person she has to open up to about her diagnosis and that’s one less person that she’ll have to worry about as things get worse for her, but would April be willing to believe anything to absolve herself of the guilt from her dishonesty?

Elsewhere on Chasing Life, Sara makes a surprising connection with one of her patients, while April takes an assignment at work about a supposed cancer-curing miracle juice and the Carver women are introduced to Ben, Sara’s new boyfriend, at an especially awkward dinner.

Do you think that Dominic is actually a playboy or could this simply be exaggerated office gossip? Could April seriously be considering trying a miracle juice rather than beginning actual medical treatment? How long will it be before she ends up confessing to Sara and the rest of her family that she’s been diagnosed with cancer?